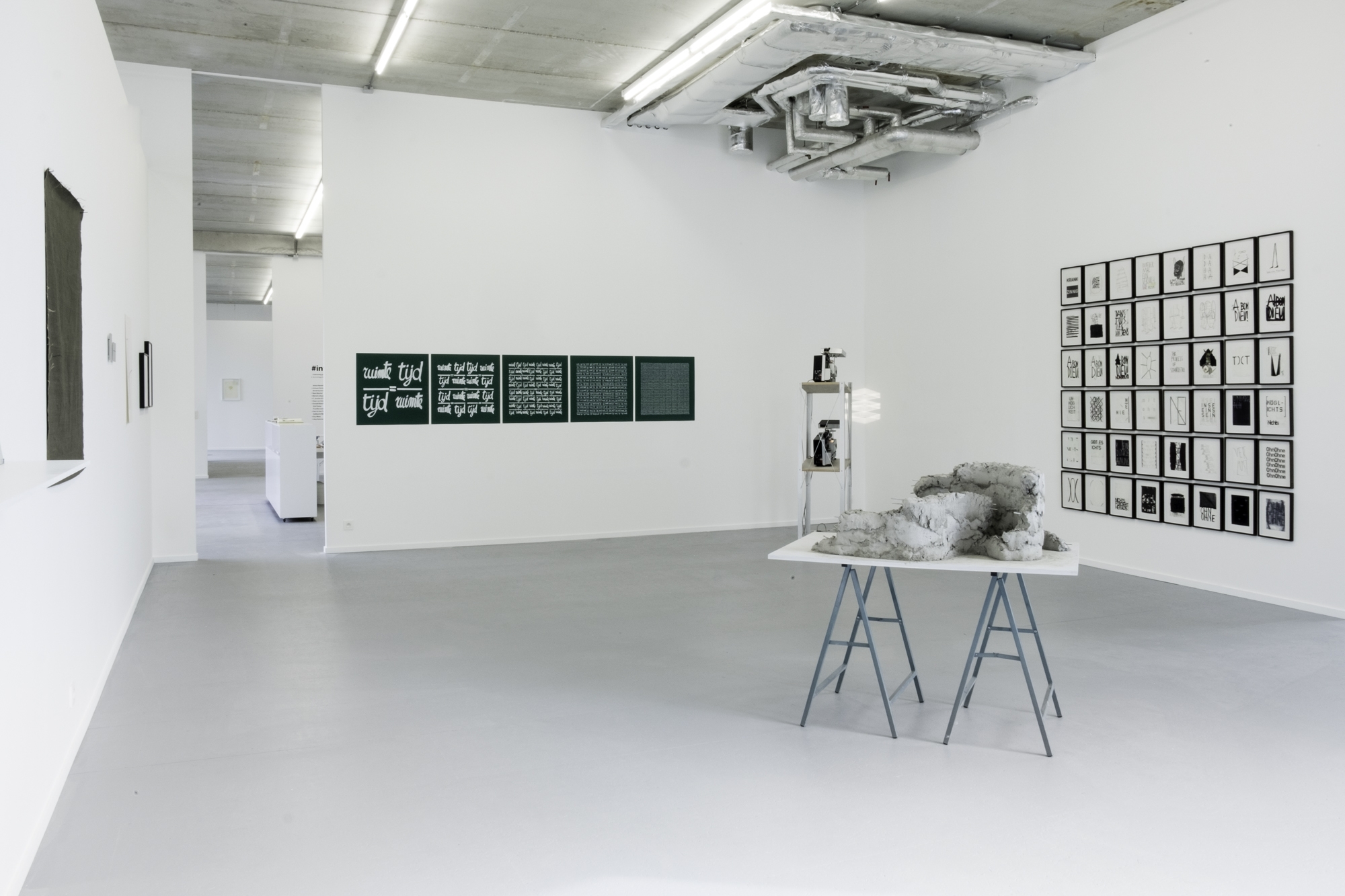 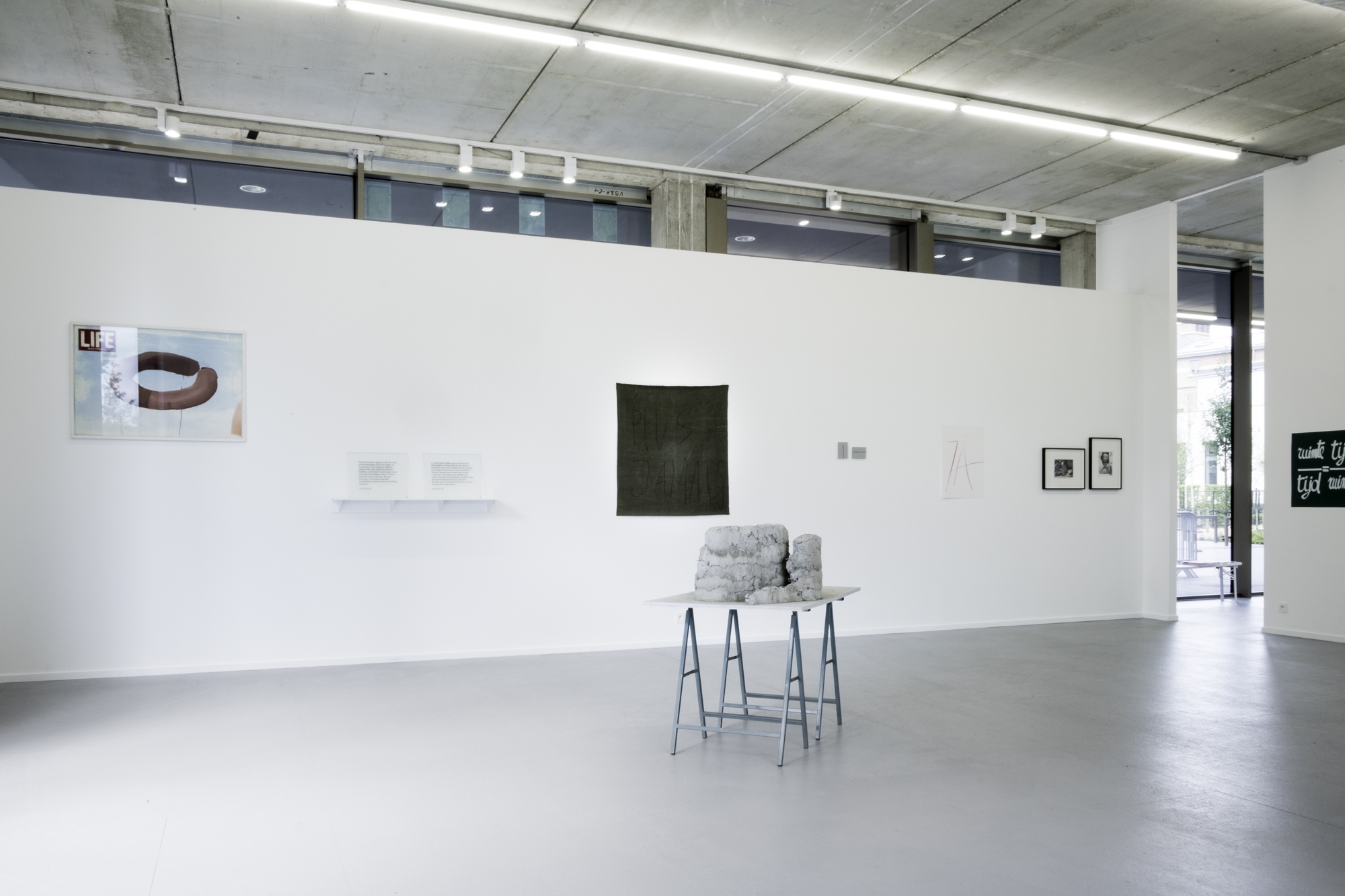 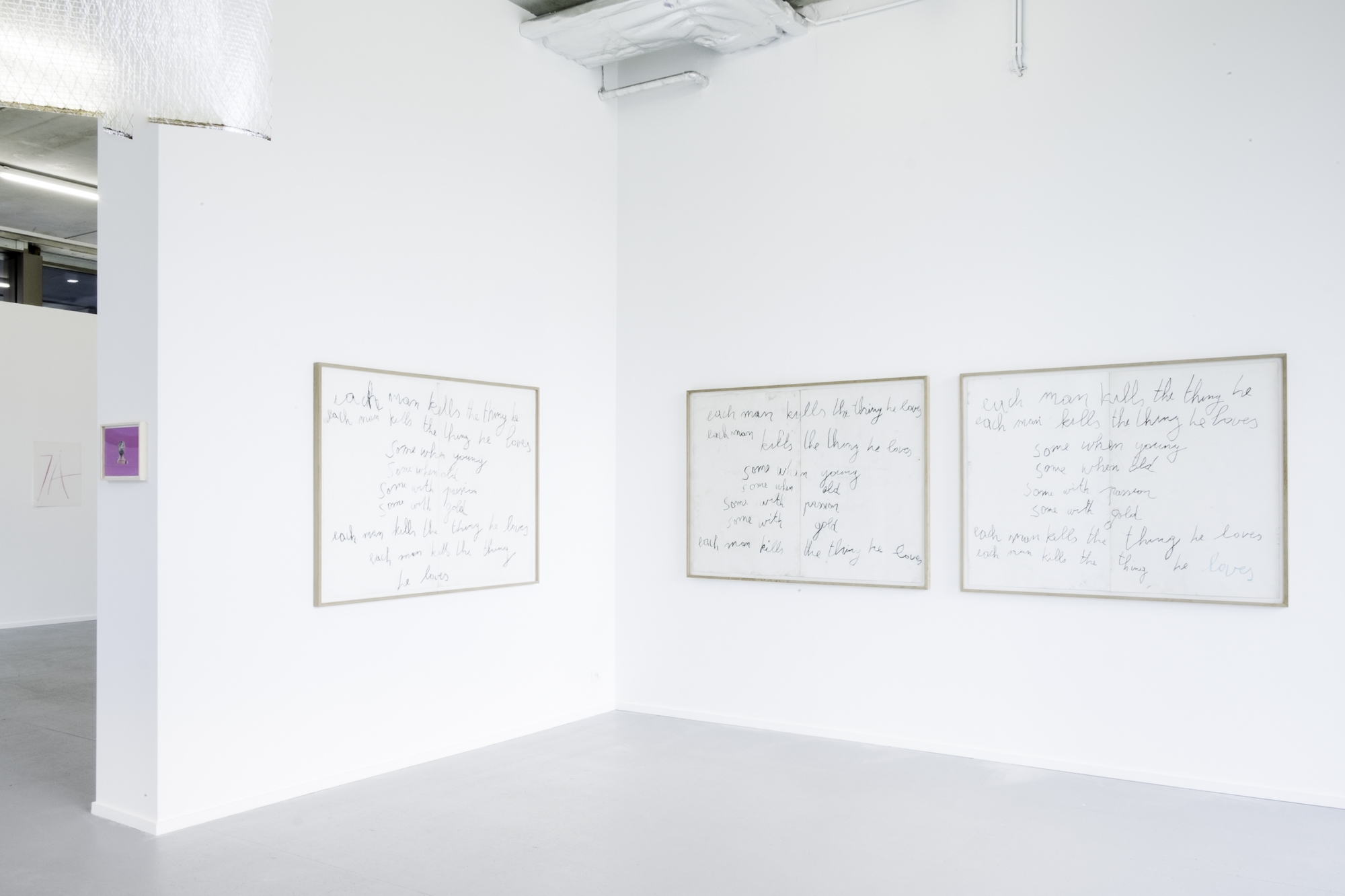 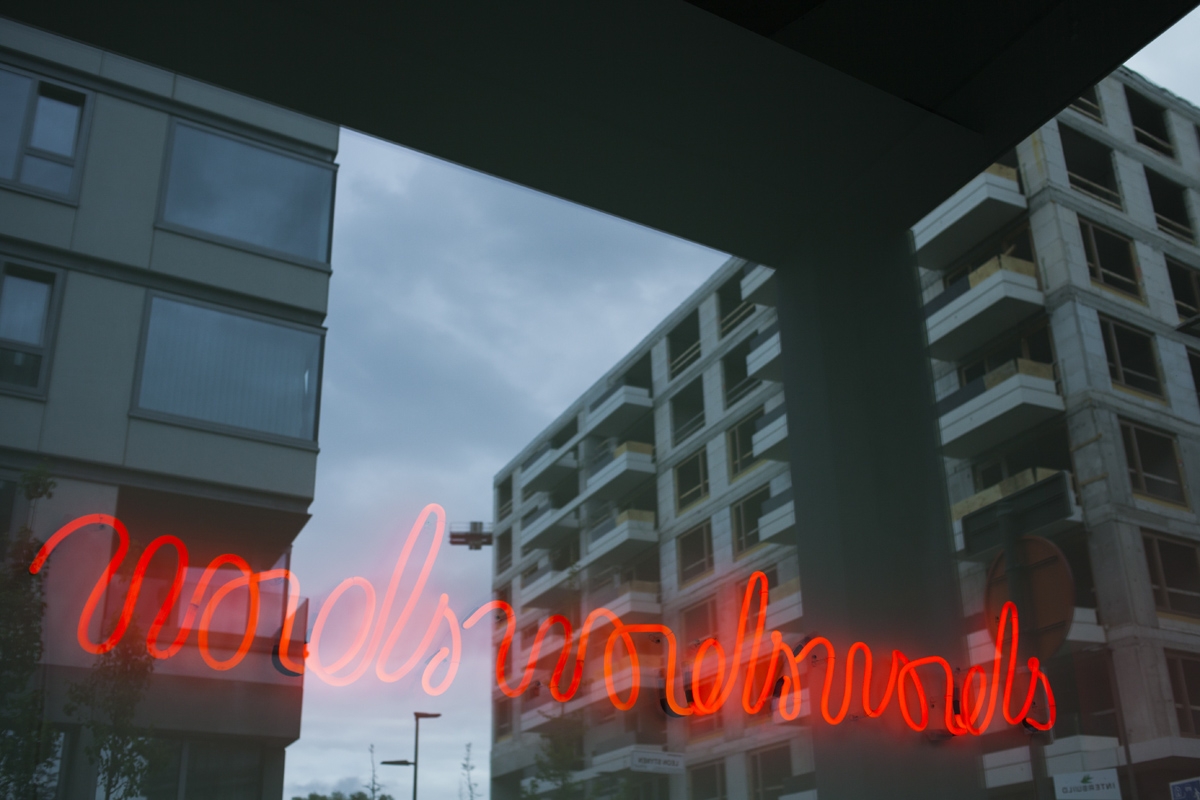 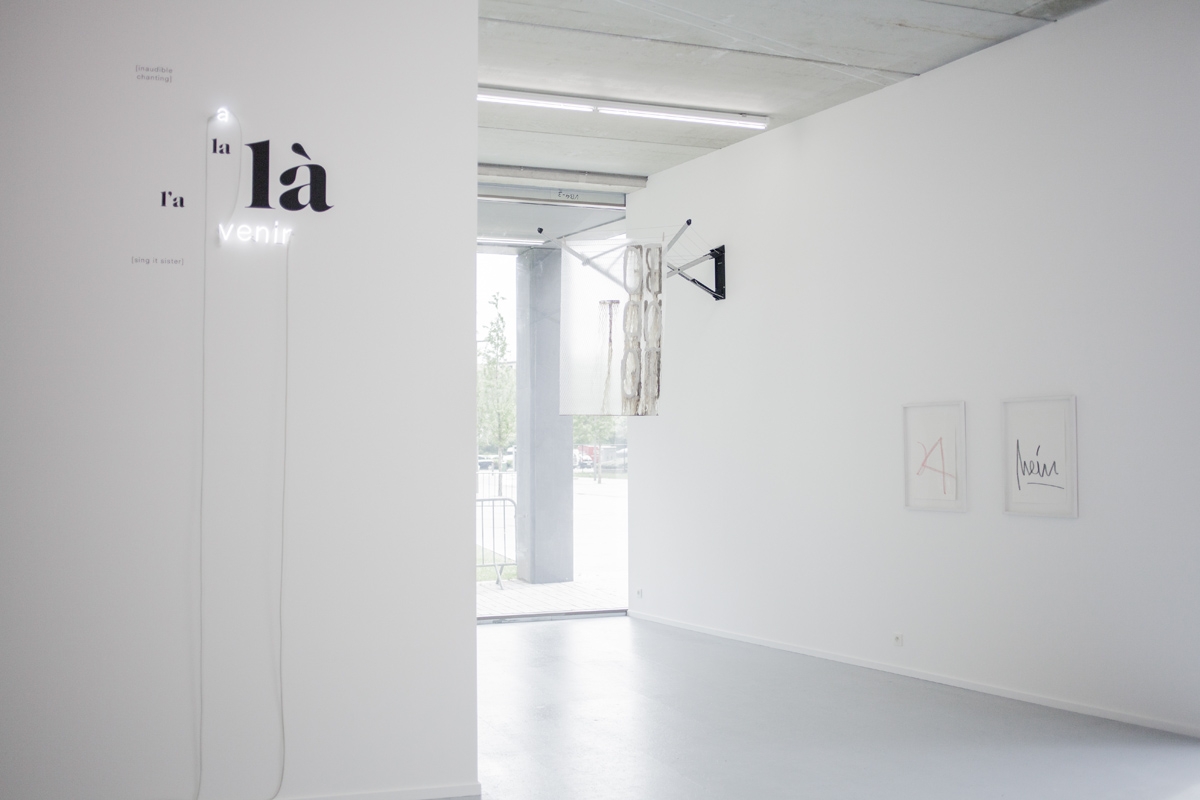 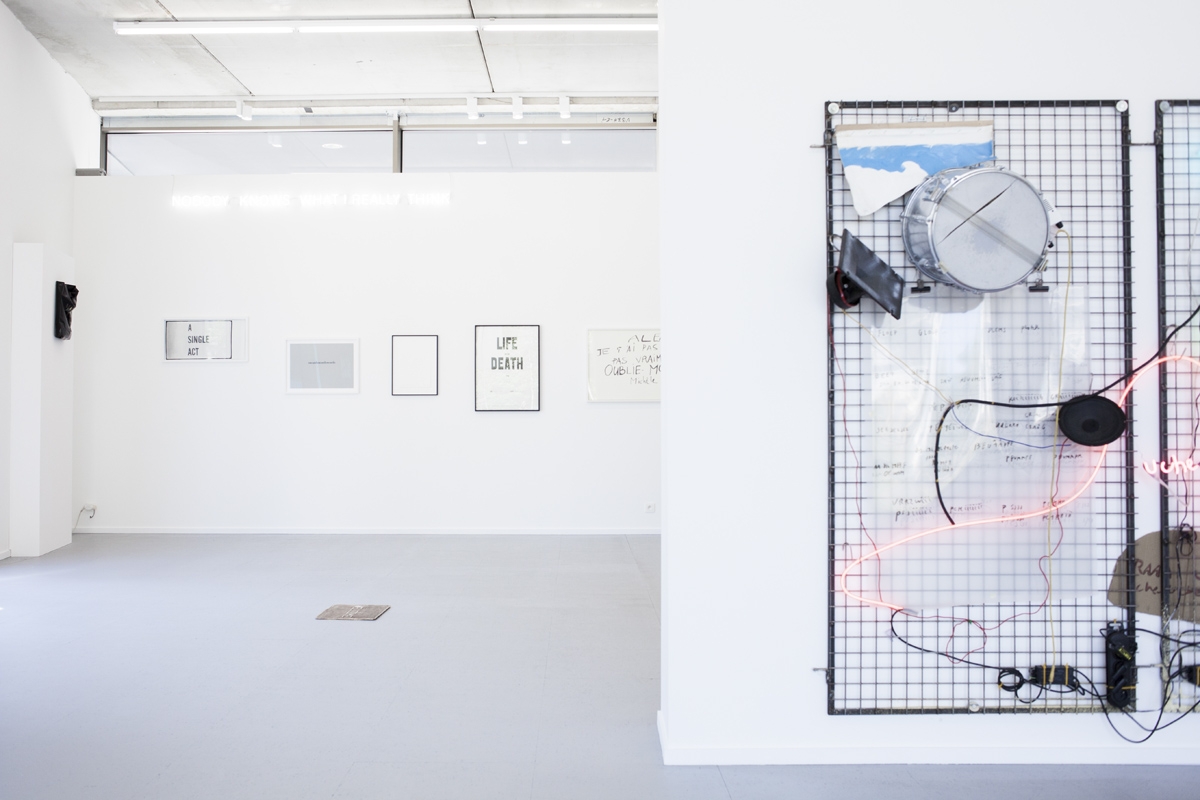 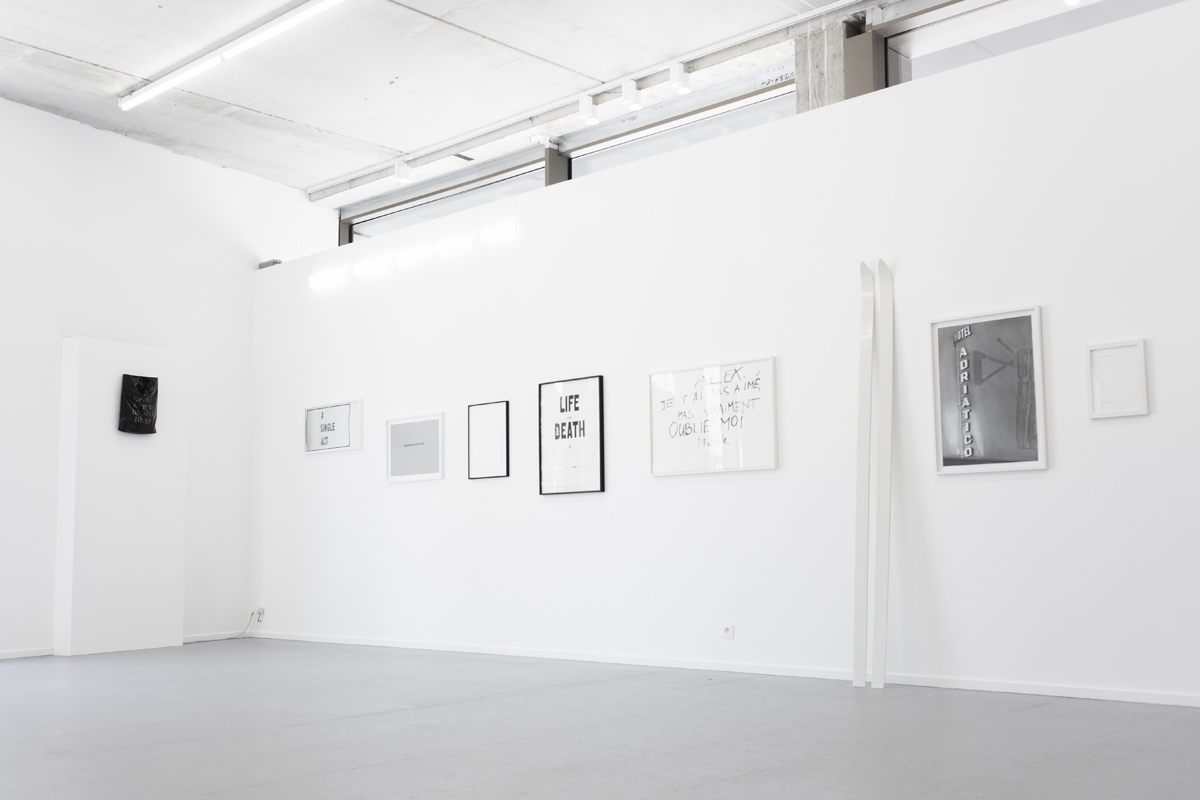 “Magritte didn’t mean Les Mots et les images (1929) to be an ‘aesthetic’ programme; he saw it as a how-to guide to creating disruptive images.” Jan Ceuleers qualified René Magritte’s use of language in his oeuvre as a probing of the frontiers of imagination. By filling in a random shape with the words “personnage éclatant de rire”, the Belgian surrealist artist was painting the figure in the spectator’s imagination. In adding the caption “ceci n’est pas une pipe” below the image of a pipe, he marked the border between painting and reality. The painting is and after all remains but a painting. “wordswordswords” in a sense owes a debt to Magritte’s use of language. Language after all adds a similar level of disruption to the works on show in this exhibition. Words for instance underwrite the purpose of the decor in the works of Guillaume Bijl and Rik De Boe, with captions like “Bar” and “Hotel Adriatico” summoning the illusion of a reality. These artists, too, pointedly capture the betrayal of the image. Ante Timmermans’ string of words appears to offer a strikingly fitting summary of this idea, with the concepts of “FICT” and “FACT” giving rise to a “FICTITIOUS” conclusion. A number of fragments in Sadaâne Afif’s “The Fountain Archive” include clippings from magazines, books and catalogues that show reproductions of the iconic “Fountain” piece. Snippets of text placed next to, above and below images of Duchamp’s readymade haphazardly contextualise its meaning. Because of its fragmentary nature, this contextualisation offers no more than a tentative departure point. The artist in essence leaves it up to the audience to complete the interpretation. This audience is moreover both spectator and reader. A similar dynamic plays out in the words of Johan De Wilde, as well as in Danh Vo’s letter and Mekhitar Garabedian’s “Lettre de Michèle”. “Je t’ai pas aimé, pas vraiment. Oublie moi,” the latter instructs its reader. “Lettre” means both the written symbol “letter” in French and the written document sent by mail. A message is contained in the artwork. The same message is presented as a puzzle in the work of Navid Nuur. In his work, letters are heaped on top of each other. Taken together, they read like a line in Shakespeare’s Hamlet: “TO BE OR NOT TO BE”. His linguistic reference contains an allusion to culture and tradition. In contrast to the seeming concurrence of the reading and aesthetic experience in the work of Nuur, the language of the word is juxtaposed to that of the symbol in Louise Bourgeois’ “I LOVE YOU”. The infinite drawn loop is flanked by a fraction on both ends. The perpetual motion she inherently suggests has a premature ending. The work subtly rejects the notion that things can be illustrated and named in an unambiguous fashion. Kelly Schacht reminds us that the idea of an unambiguous language is incidentally equally rooted in a false assumption. The lyrics to her “lalala” ditty prove treacherously complex, with every “la” spelled differently in spite of their identical phonetic sound – an intervention that brings to mind Jacques Derrida’s theory. Schacht’s words may sound identical, but their meaning knows only differences. Marie José Burki’s work, which gave the exhibition its name, draws the circle to a close. This piece projects the phrase “wordswordswords” onto a wall in neon lighting. The word is repeated thrice and made into a new word – senseless and soundless. - Joris D’hooghe