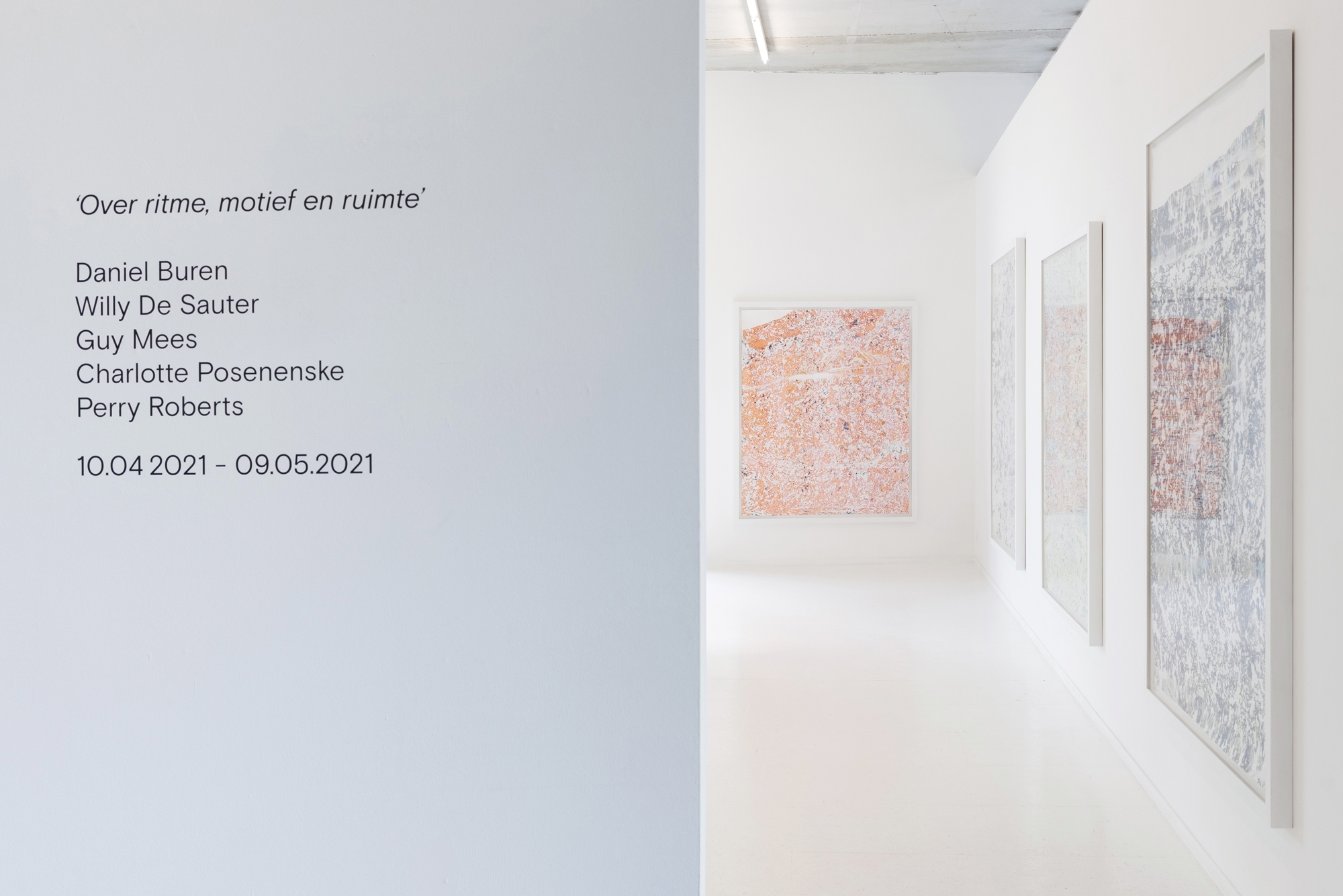 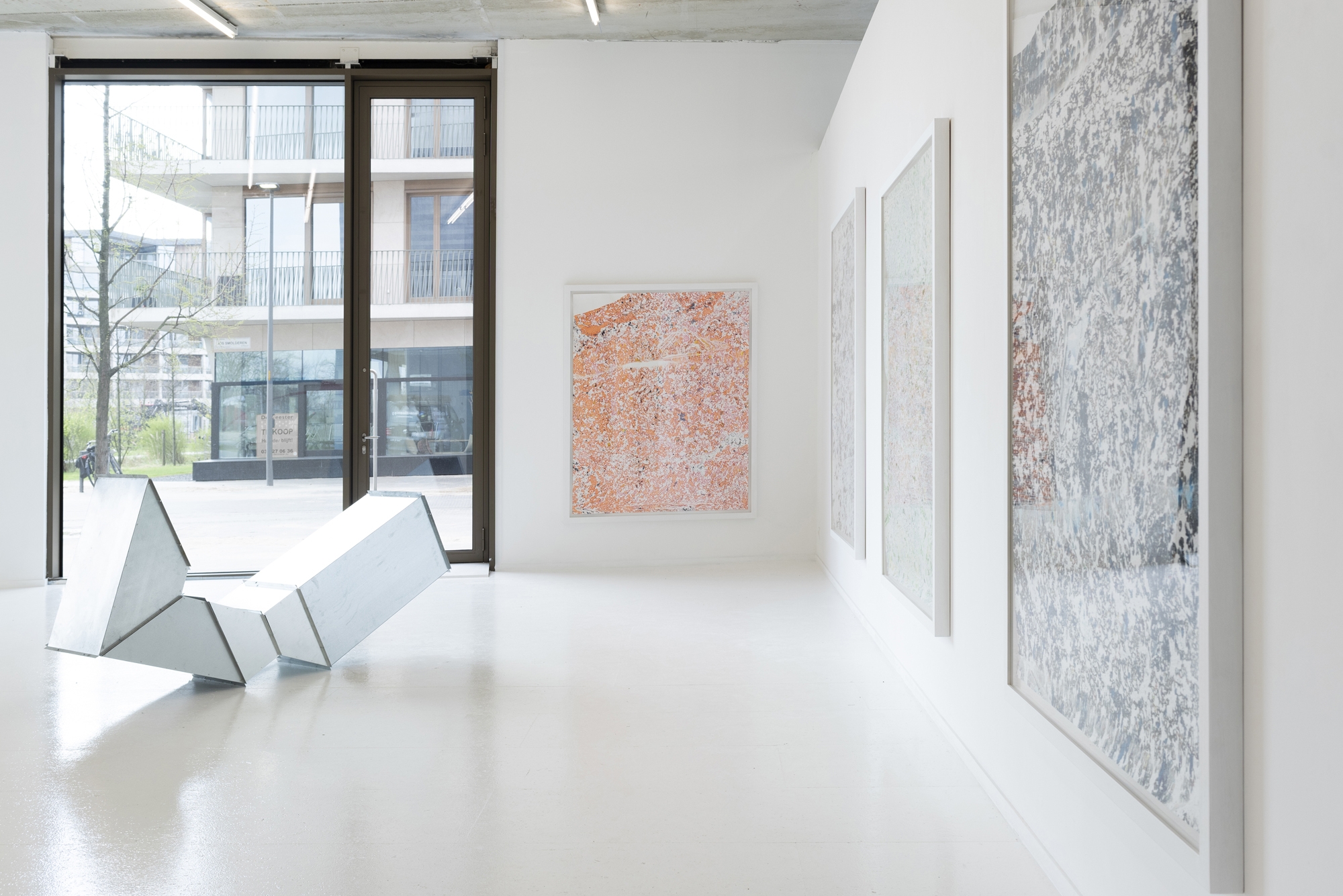 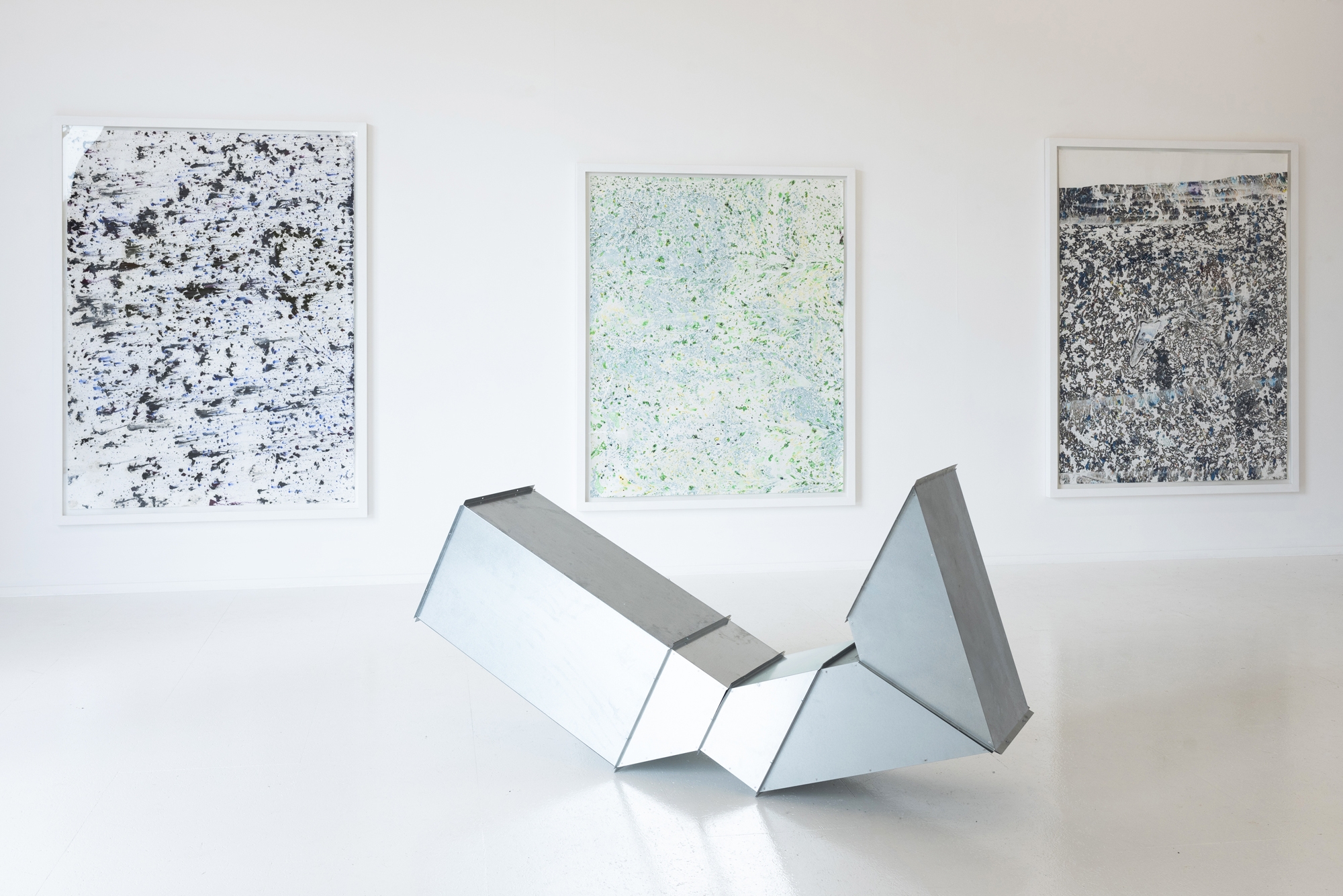 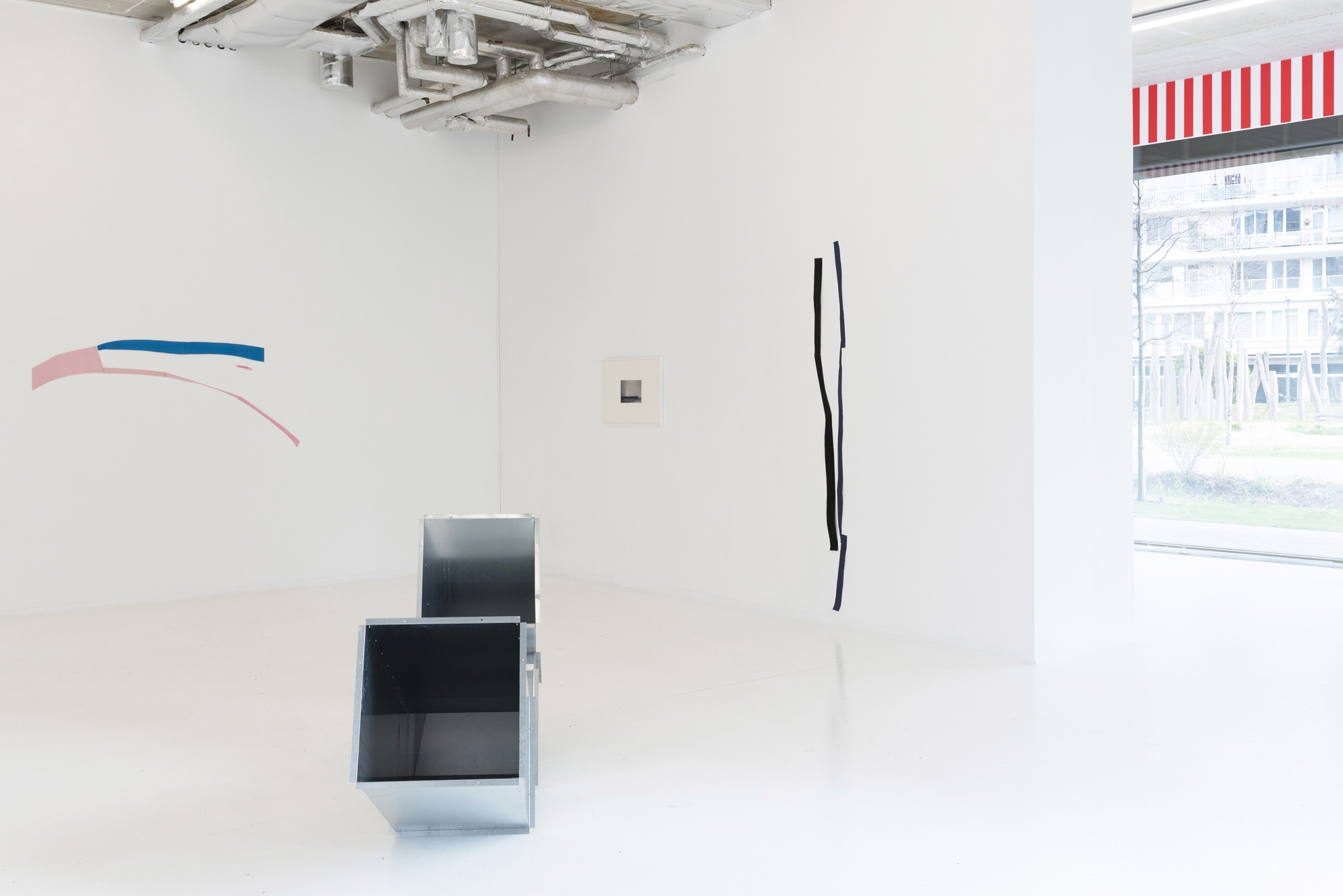 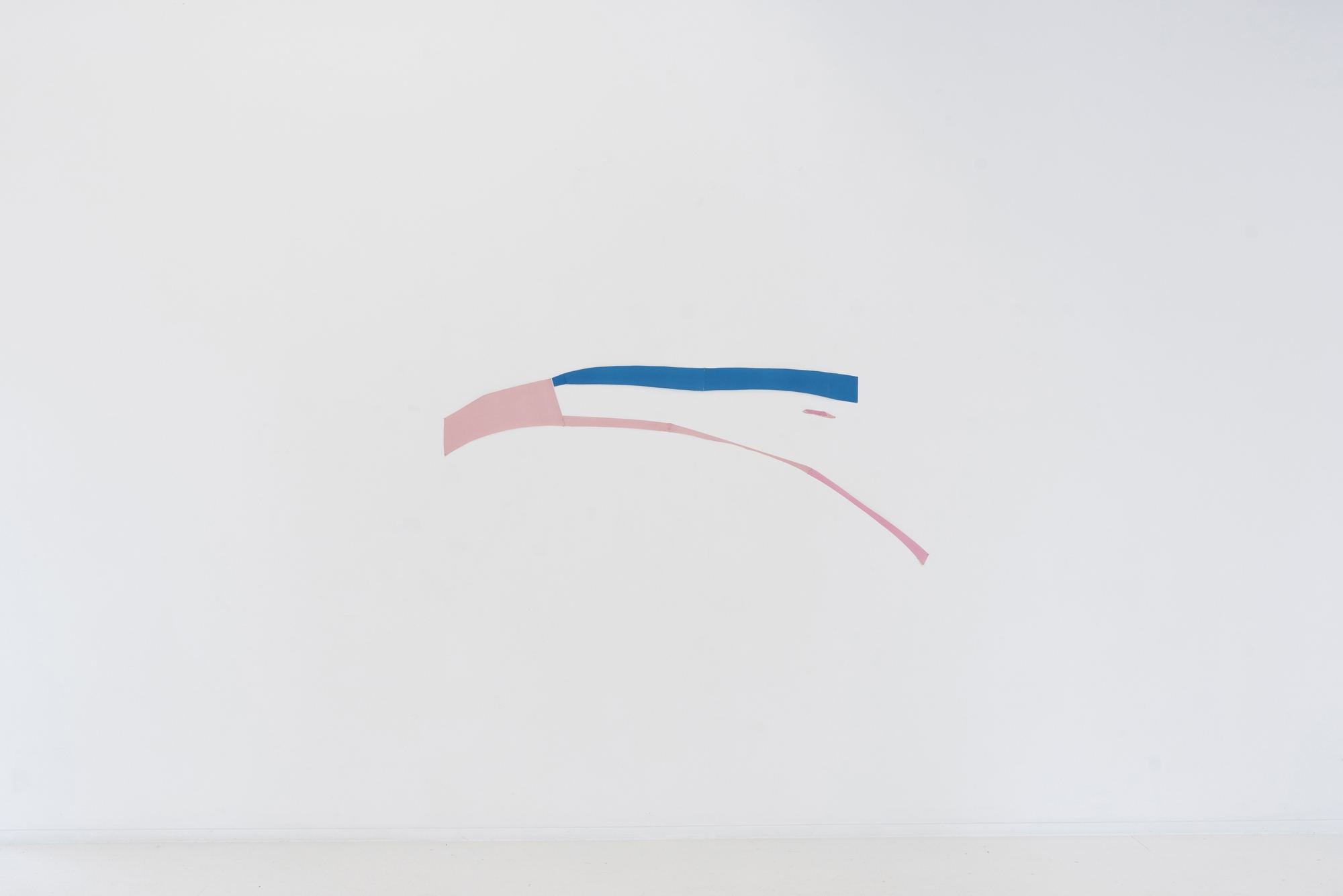 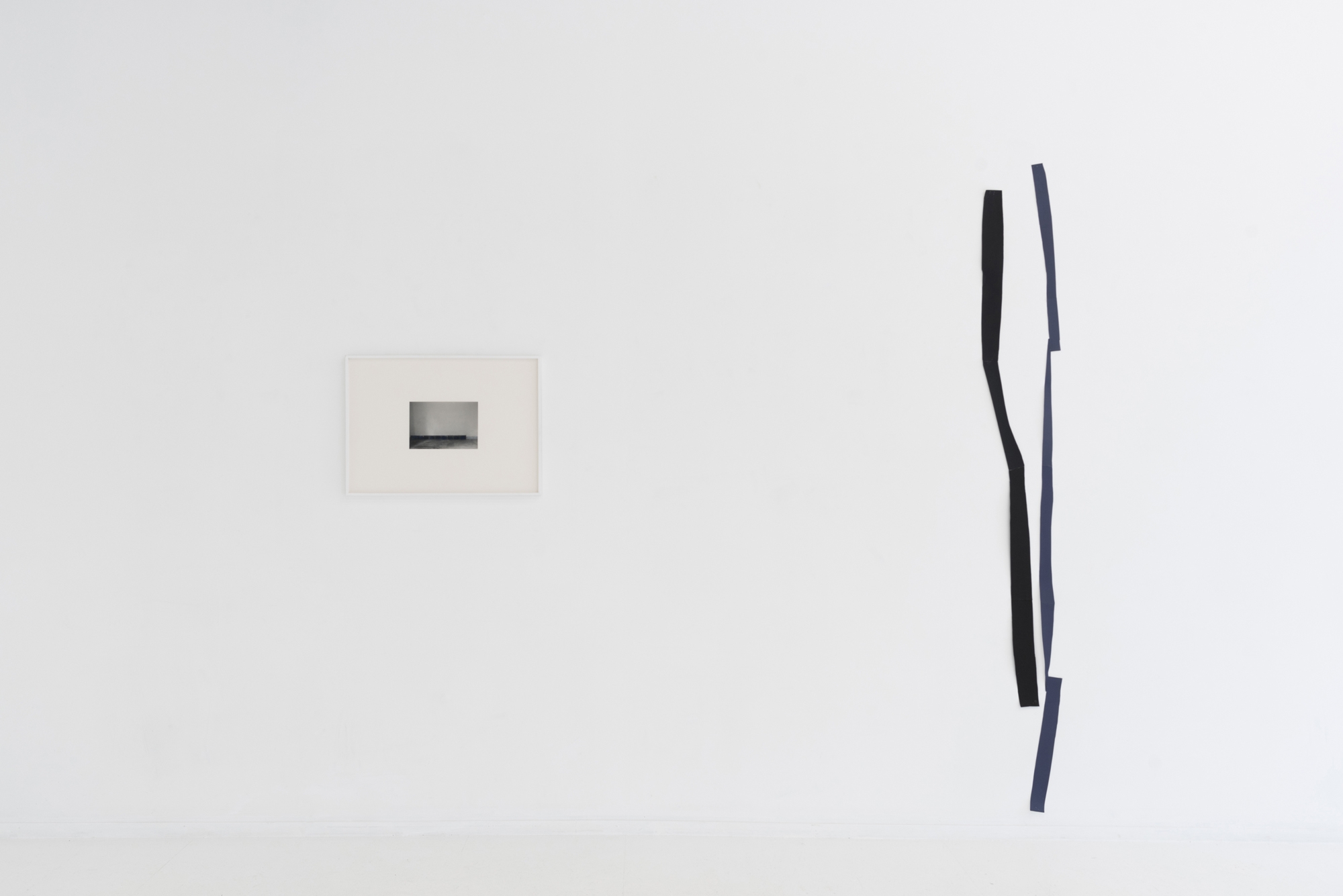 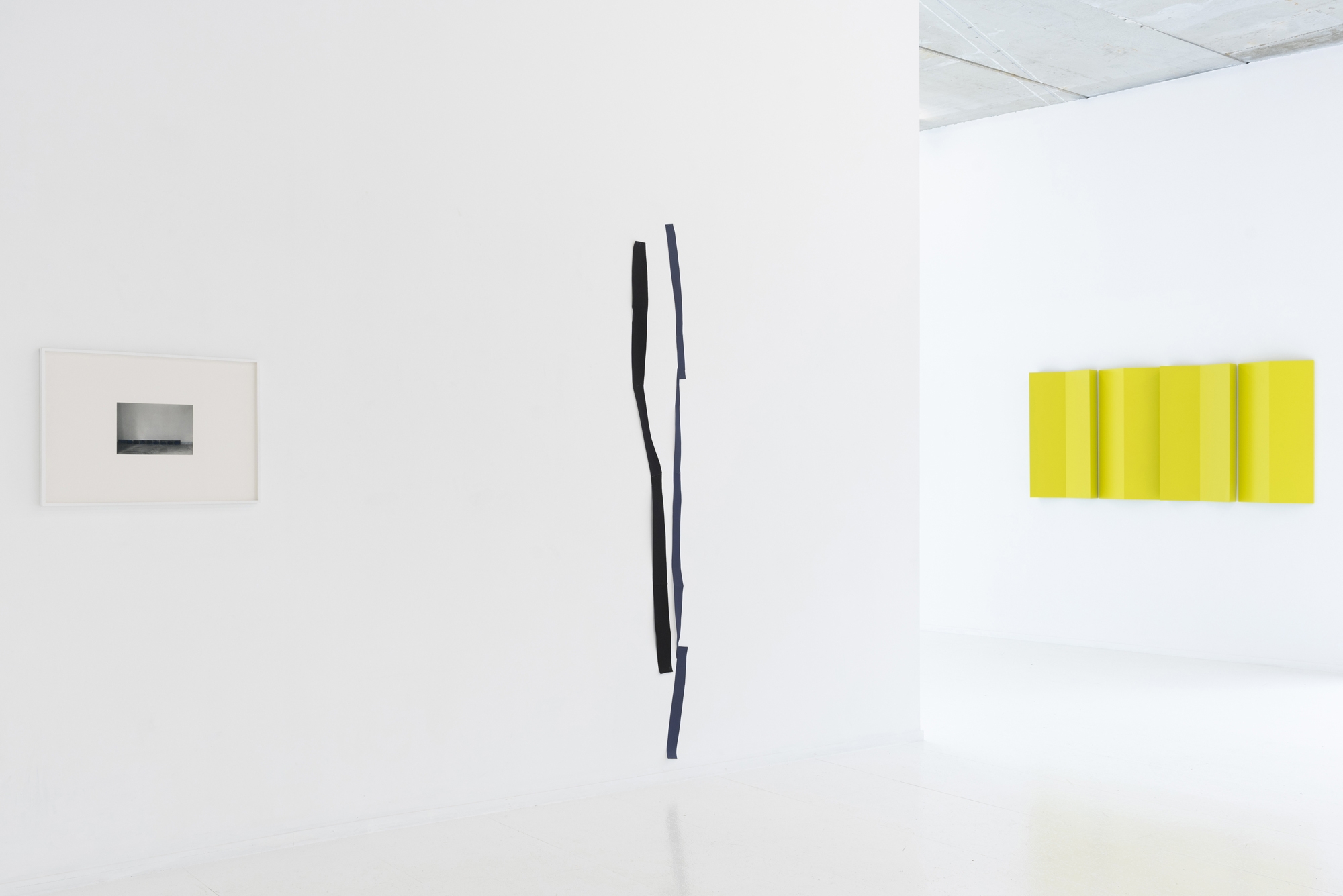 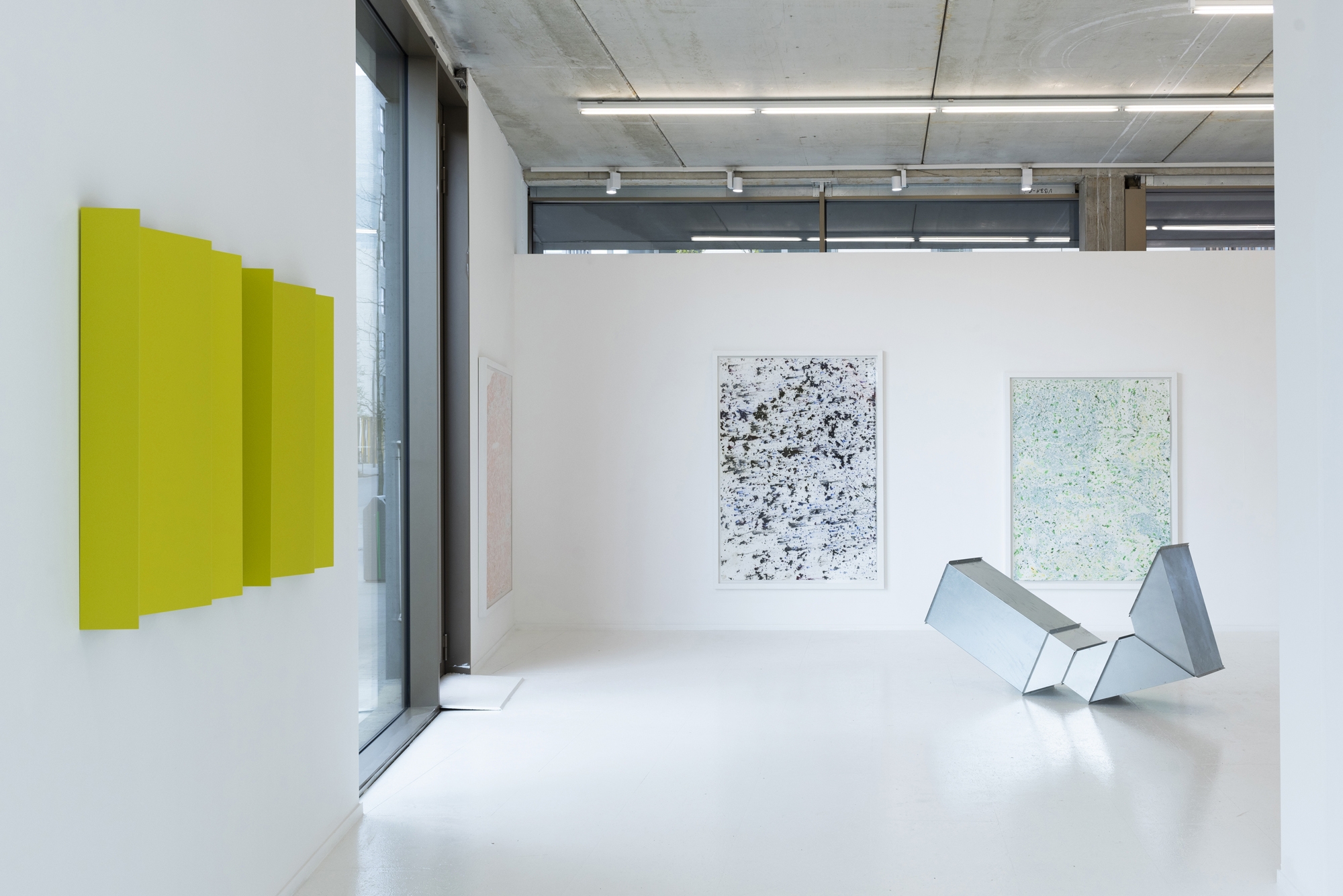 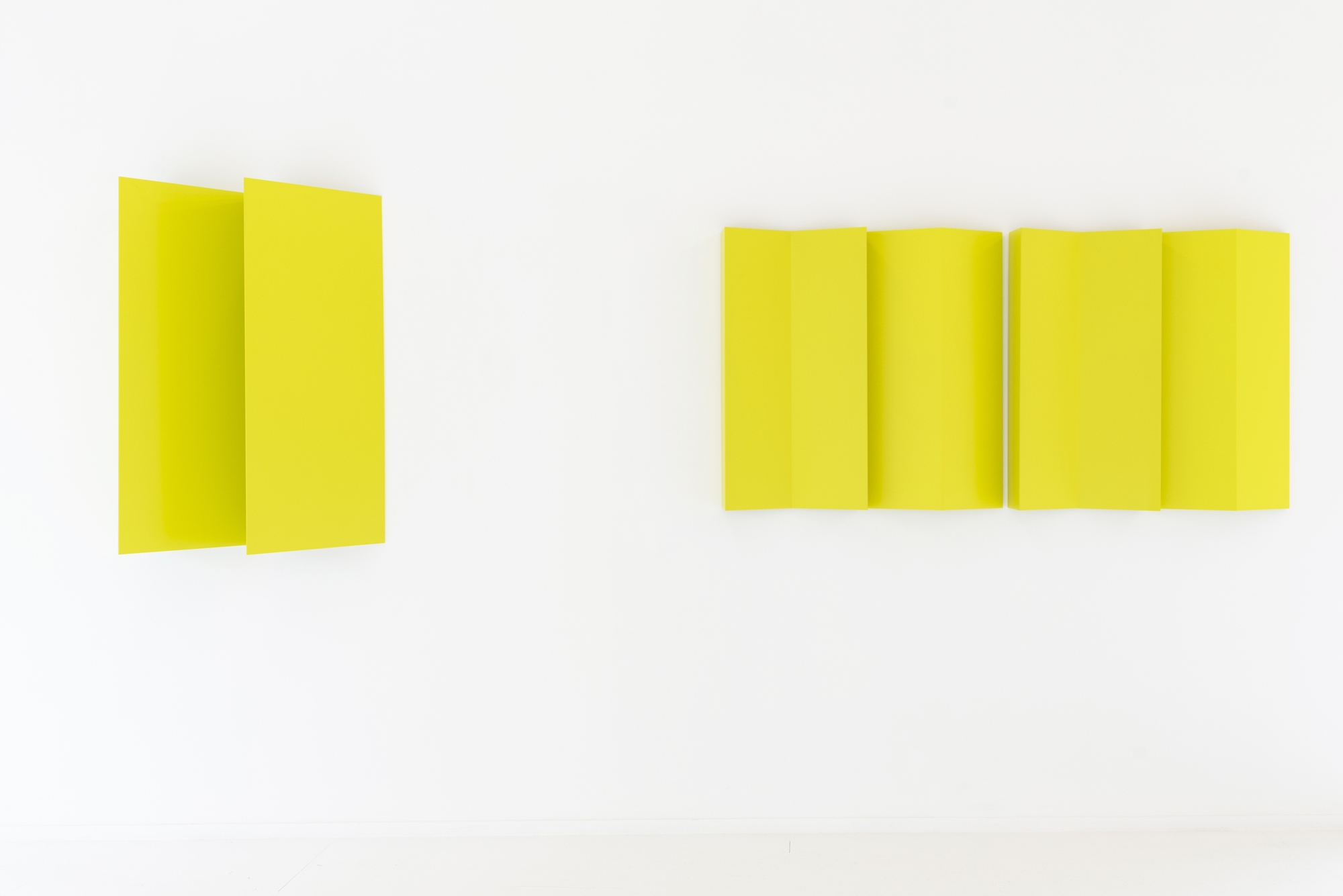 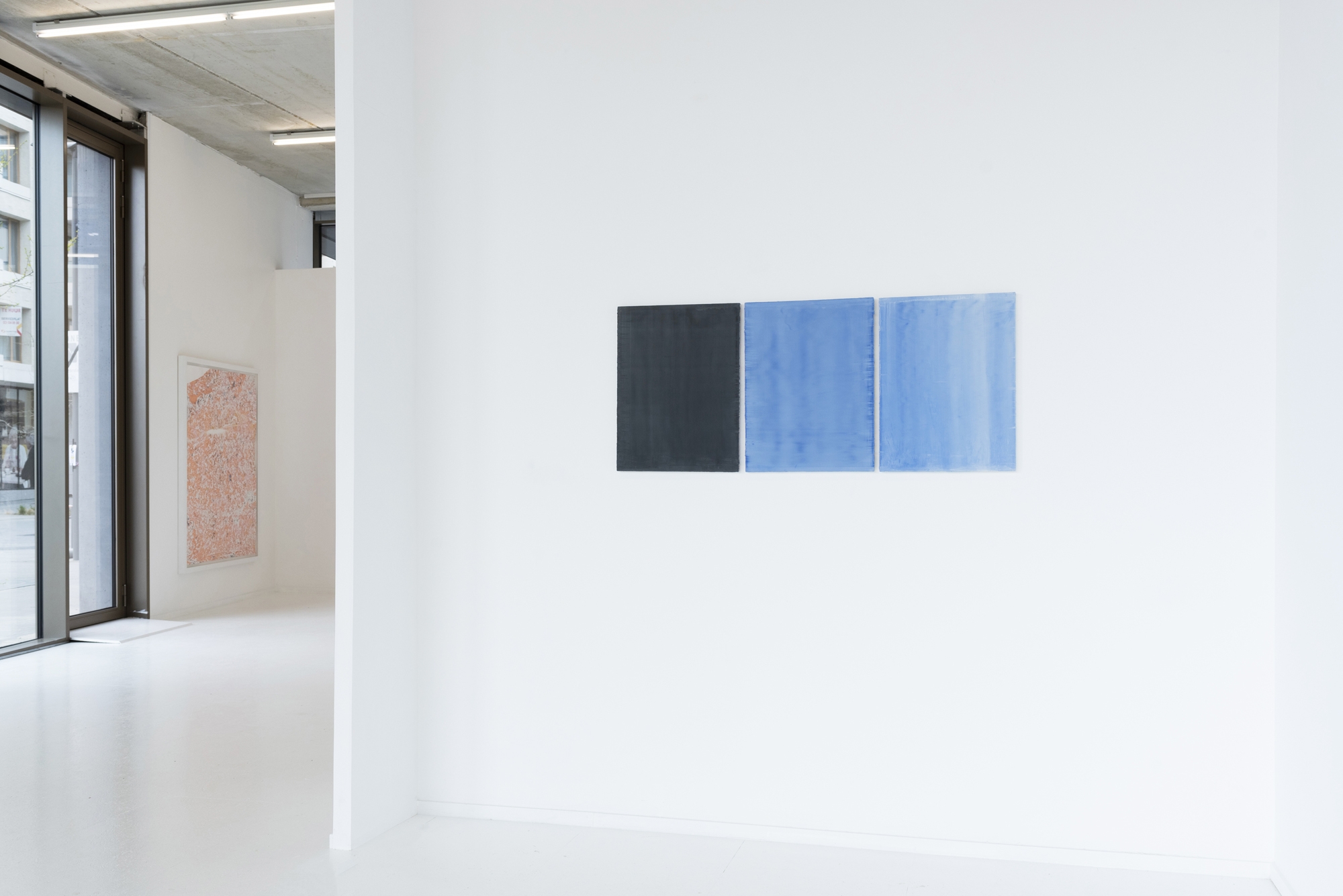 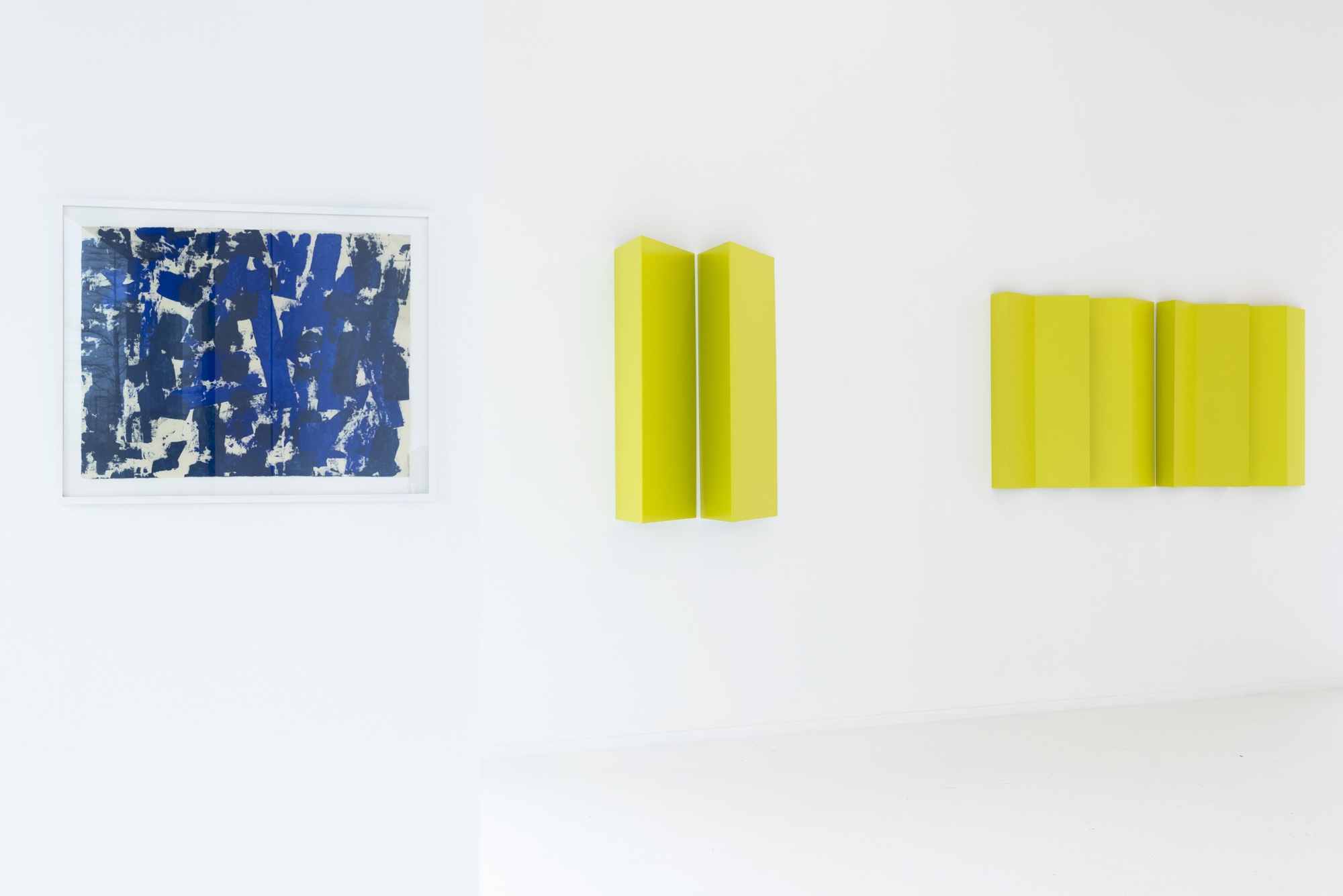 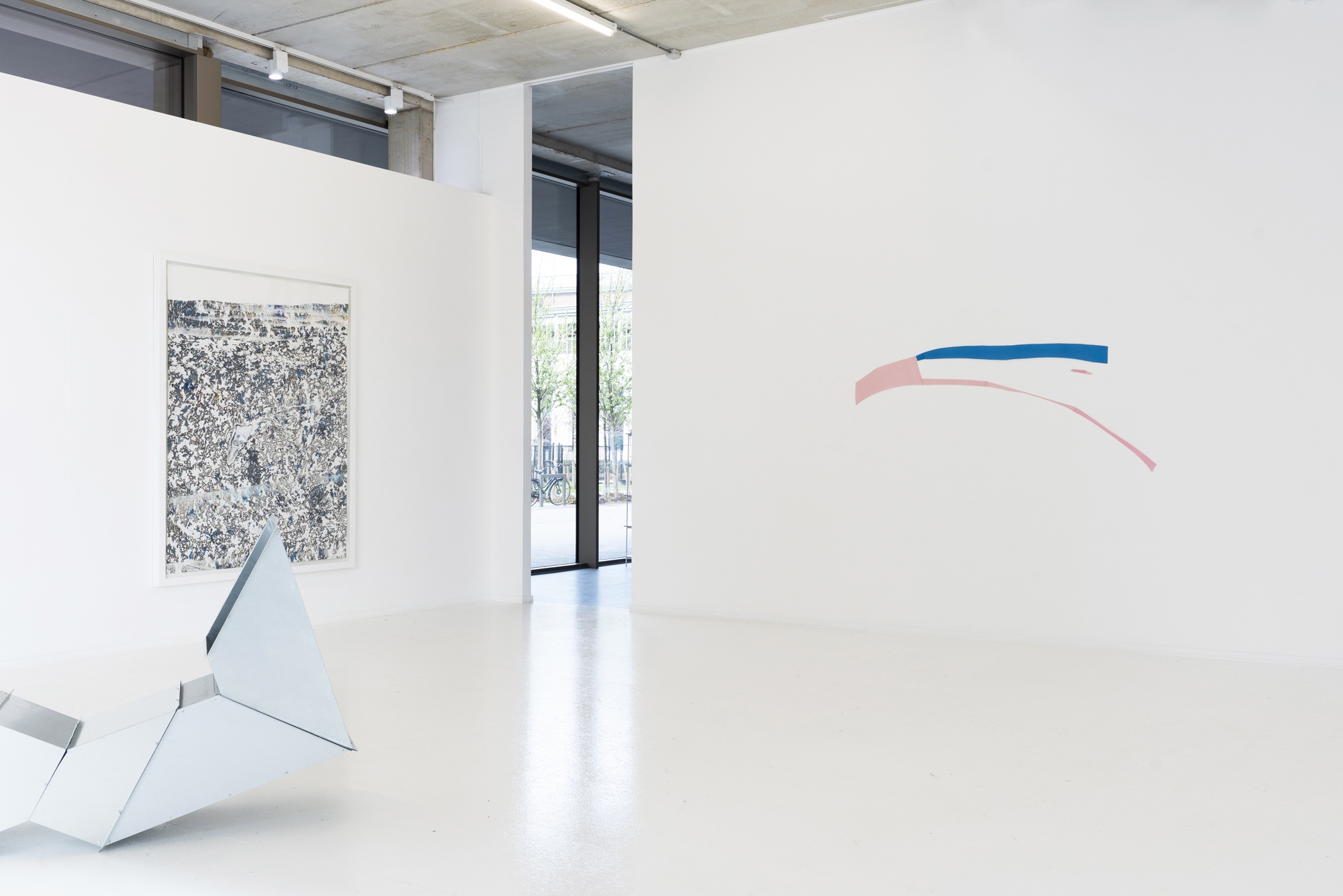 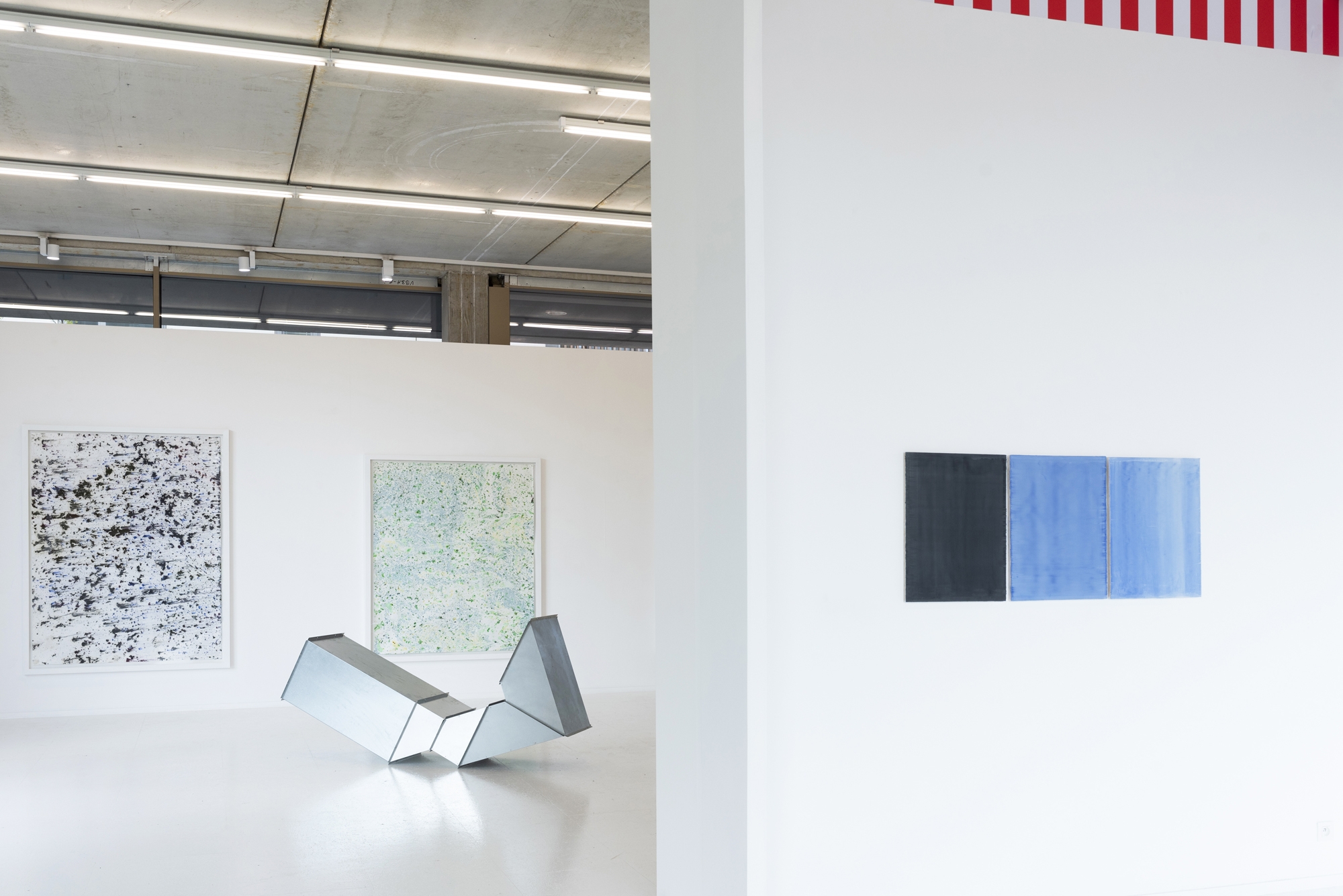 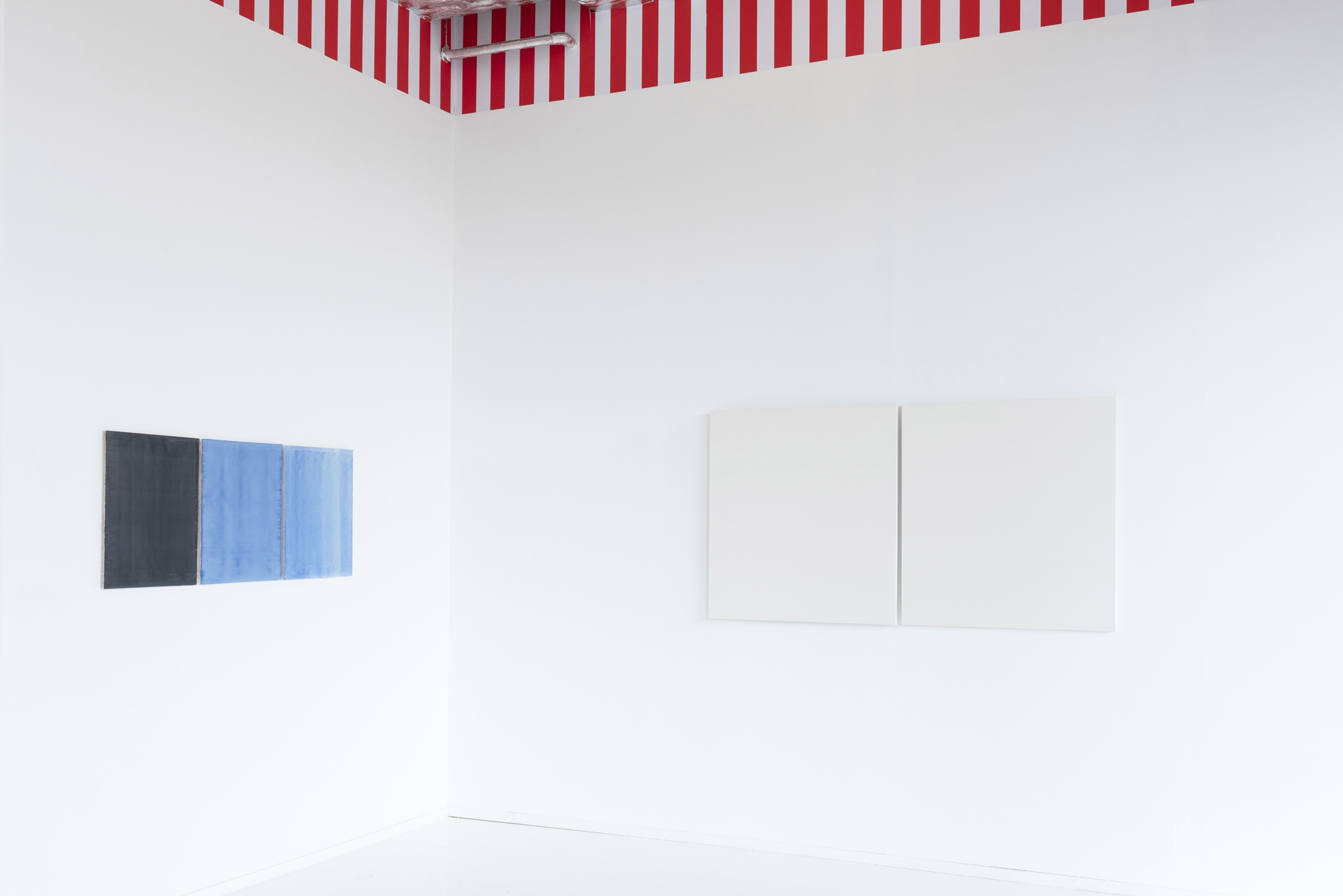 Art is a story about encounters, a combination of specific qualities: head and heart, thoughts and feelings. Although a translation remains necessary to indicate this feeling. ‘Over ritme, motief en ruimte’ (About rhythm, motif and space) brings together the work of five artists: Daniel Buren, Willy De Sauter, Guy Mees, Charlotte Posenenske and Perry Roberts.

‘Over ritme, motief en ruimte’ is about harmony, reflection and insight. As metteurs en scène these artworks direct an architectural play of repetitions and pauses, of color and subtility. The exhibition forms a network of interventions, small events that interact and comment on each other. Responsibility is the underlying condition for each of these works, it is the most important rule of the game. Artists have a history of opposing the established order and show their works outside of traditions, they undermine the existing conventions. This exhibition shows us the necessity of collaboration, the critical analysis of power structures, but above all the great poetry and intelligence of artists.

Much art comes from a lament, from an attempt to capture human feelings, others from a cultivated wit. Perry Roberts (°1954, UK) shows with his ‘Rare earth works’ a group of different minerals that, despite their name, are relatively numerous but difficult to find. Not the minerals themselves, but their birthplaces are rare. The elements have various uses and are essential for everyday modern life. The works are the result of a specific but unpredictable process, abstract in nature but complex in visual language.

Guy Mees’ (1935-2003, Mechelen) work is characterized by a radical and poetic approach to space, form and material. The Lost Spaces owe their title to Mees’ desire to destroy the pictural space. His working method was rigid and meticulous, and the works extremely precise. They balance between idea and tactility. A combination that could only originate from an incredible freedom.

Space is one of the most important elements in the work of Willy De Sauter (° 1938, Bruges). His artistic practice has been shaped by years of concentration on spaces and matter. In his chalk paintings on panel he displays the complexity of the essence of painting. De Sauter reduces painting to its basic components. The works appear minimalistic, sometimes dry even, but they are the result of an intensive creation process and show an incredible variety of lines and materials. He makes tangible what lies hidden in the folds of the rich painterly history.

The vertical stripes by Daniel Buren (°1938, Boulogne-Billancourt) are known worldwide. Almost all of his works are temporary installations, anchored to the place for which they were made, they always point towards a direction. It is a pattern that he repeats throughout his entire artist’s life, they anchor the viewers’ attention to the space, in fact, it is his personal stamp on the space, his imprint on the exhibition. This is where art rules.

Our understanding of conceptual art is characterized by minimal but intellectual interventions. The German artist Charlotte Posenenske (1935 - 1985, Wiesbaden) belongs without hesitation to this group of artists, but her work is more radical. She made raw and elementary sculptures. Her work is a fundamental investigation into the position of the artist in relation to the work of art. She is the architect of a new kind of system, closely intertwined with her own reflections, her work lays a finger on the open nerves of our modern age.

She didn’t undermine an art system but built a new one. One that relies on originality and kinship. Posensenke's work is framed by a manifesto that underlines and protects the rules of her practice. This manifesto forms the core of her research, in which she took a radical position. An ideology that she maintained all her life. Charlotte Posenenske stopped making art during her life, she left the art world completely. Saying farewell may be the best way to keep something alive.