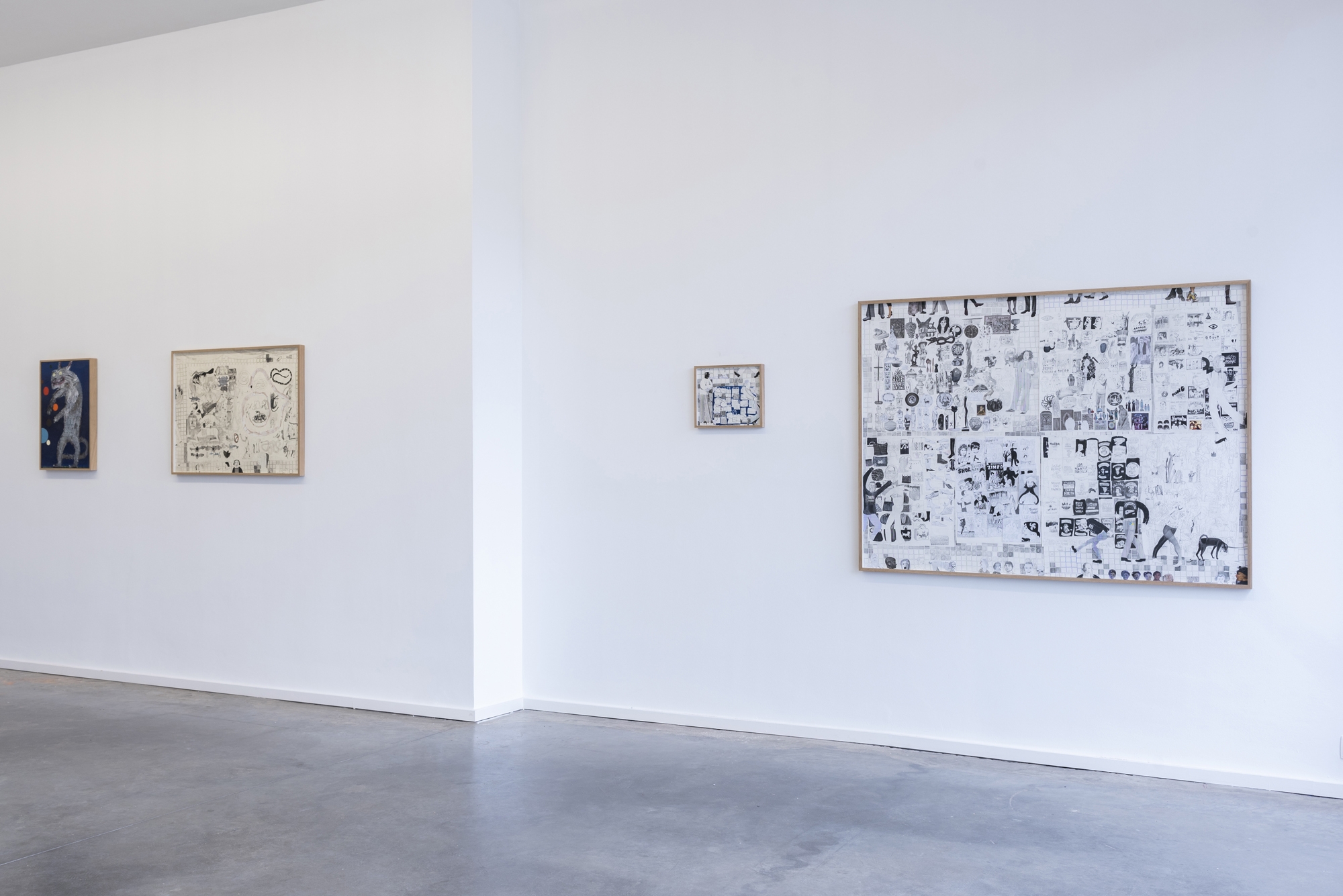 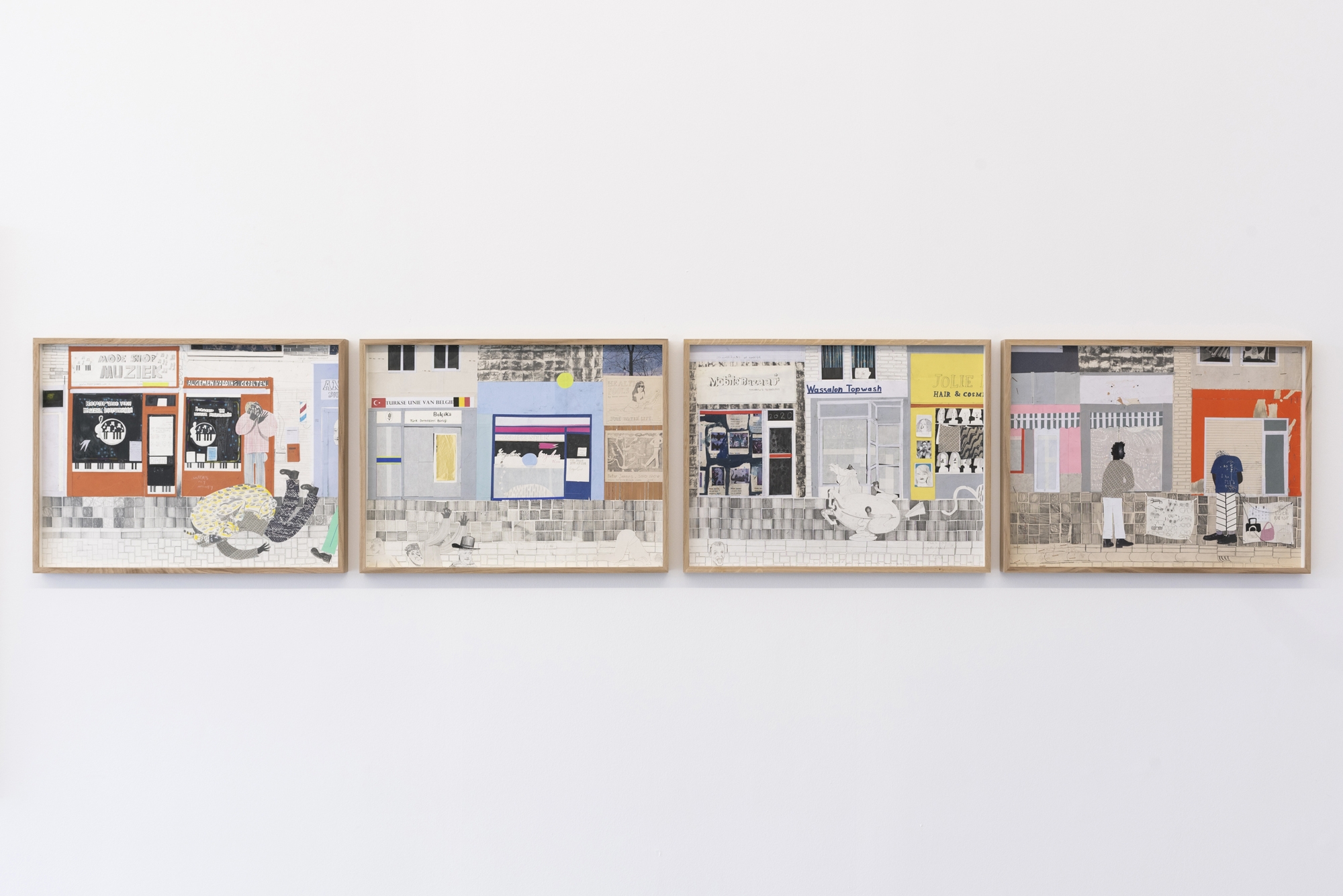 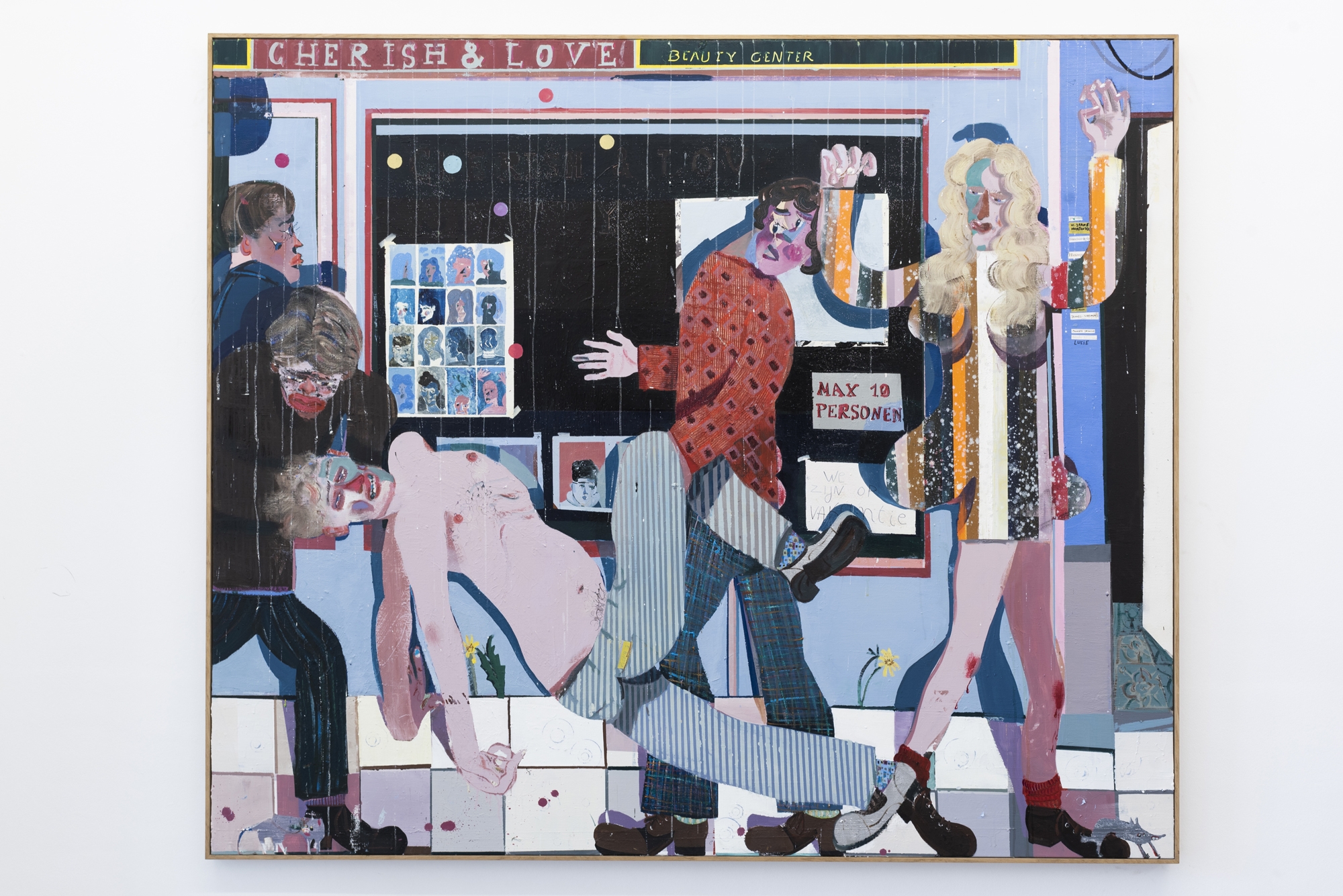 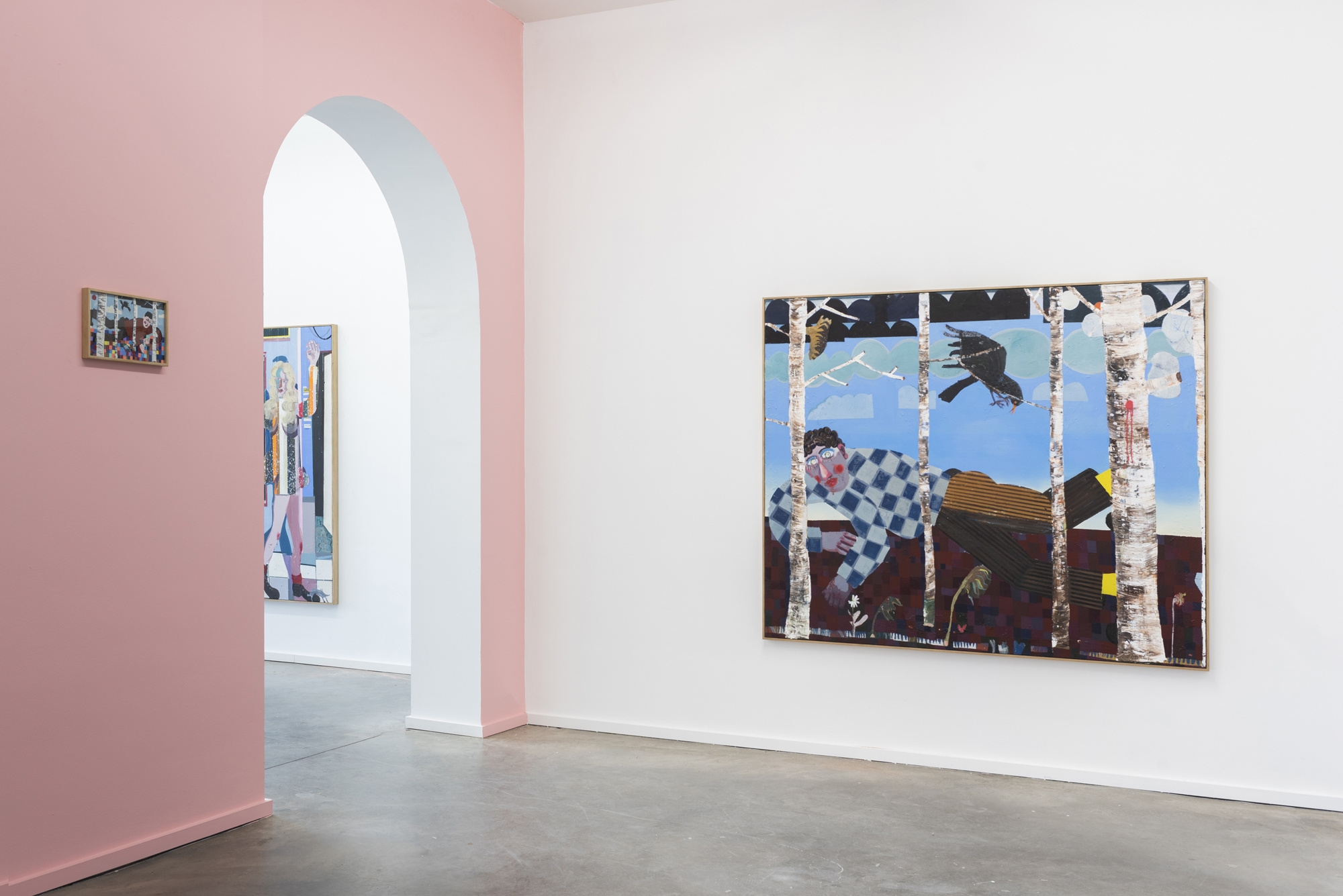 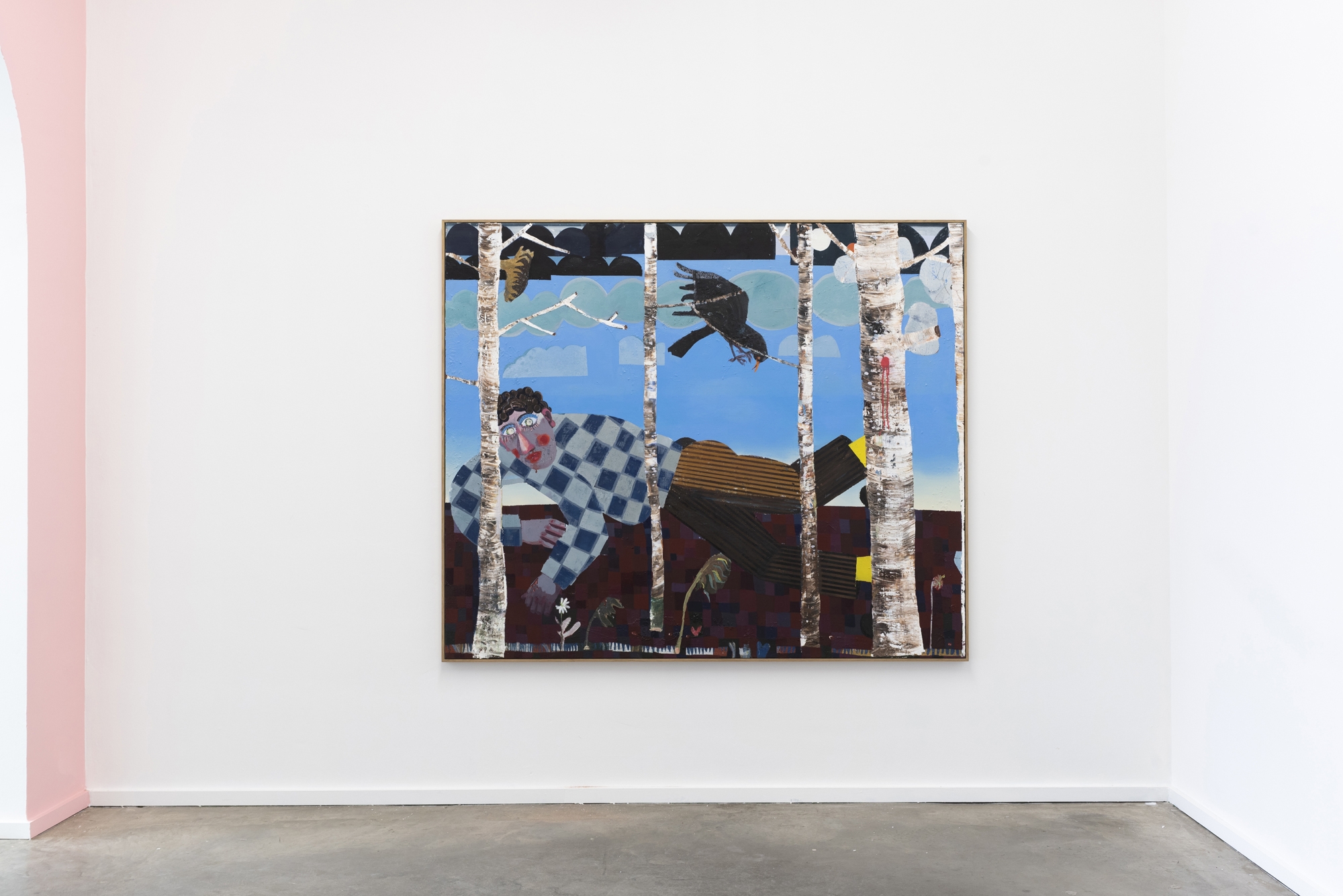 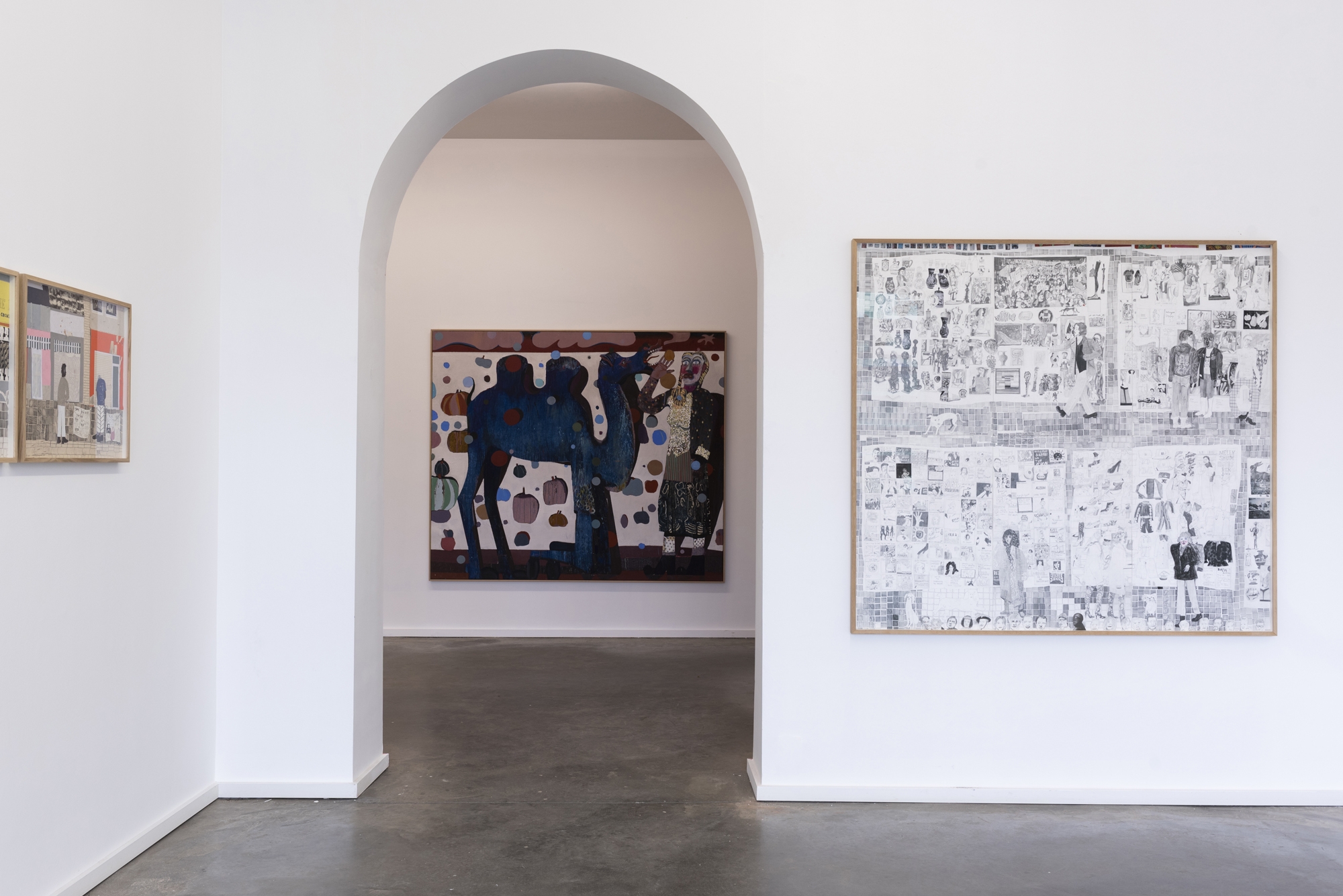 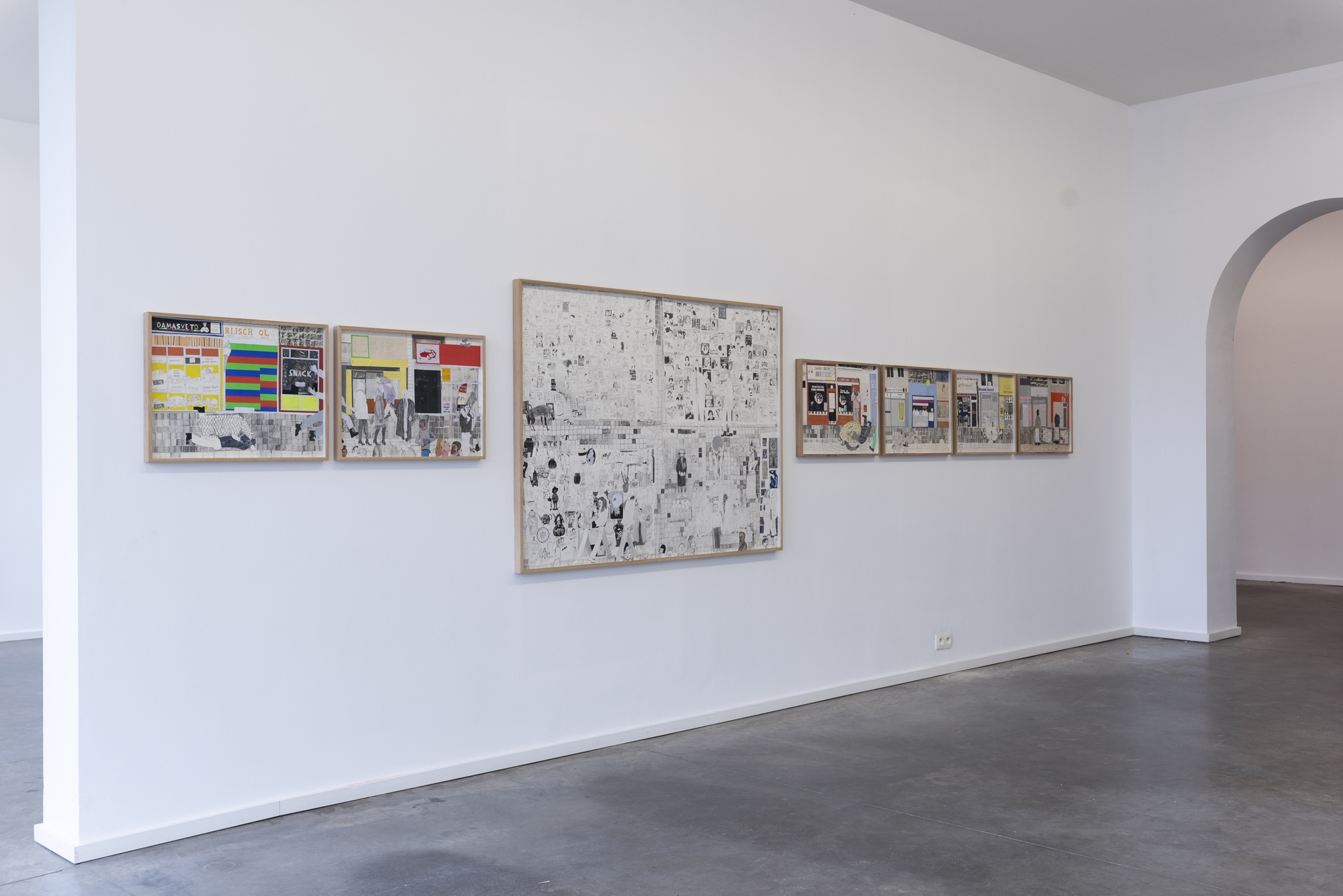 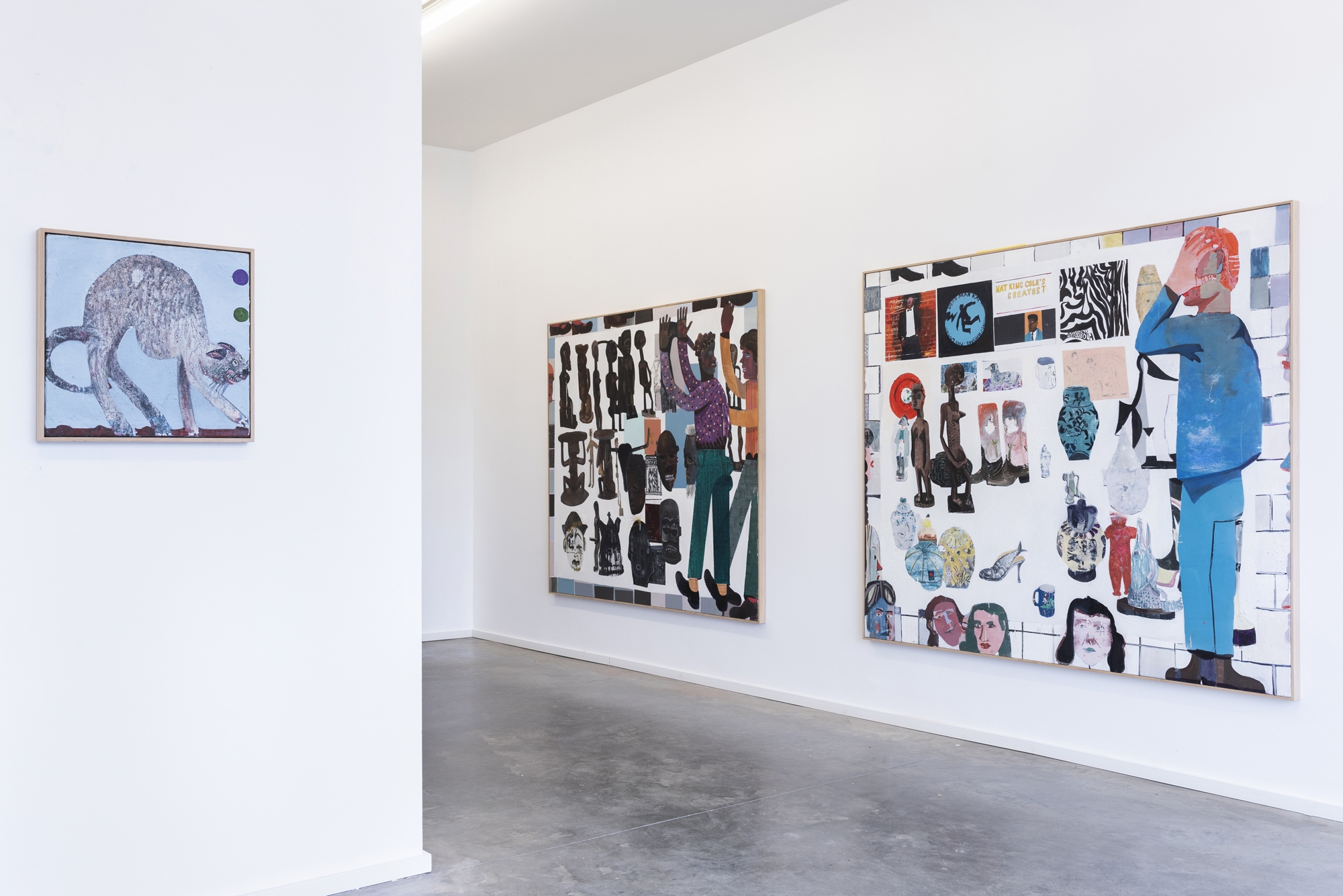 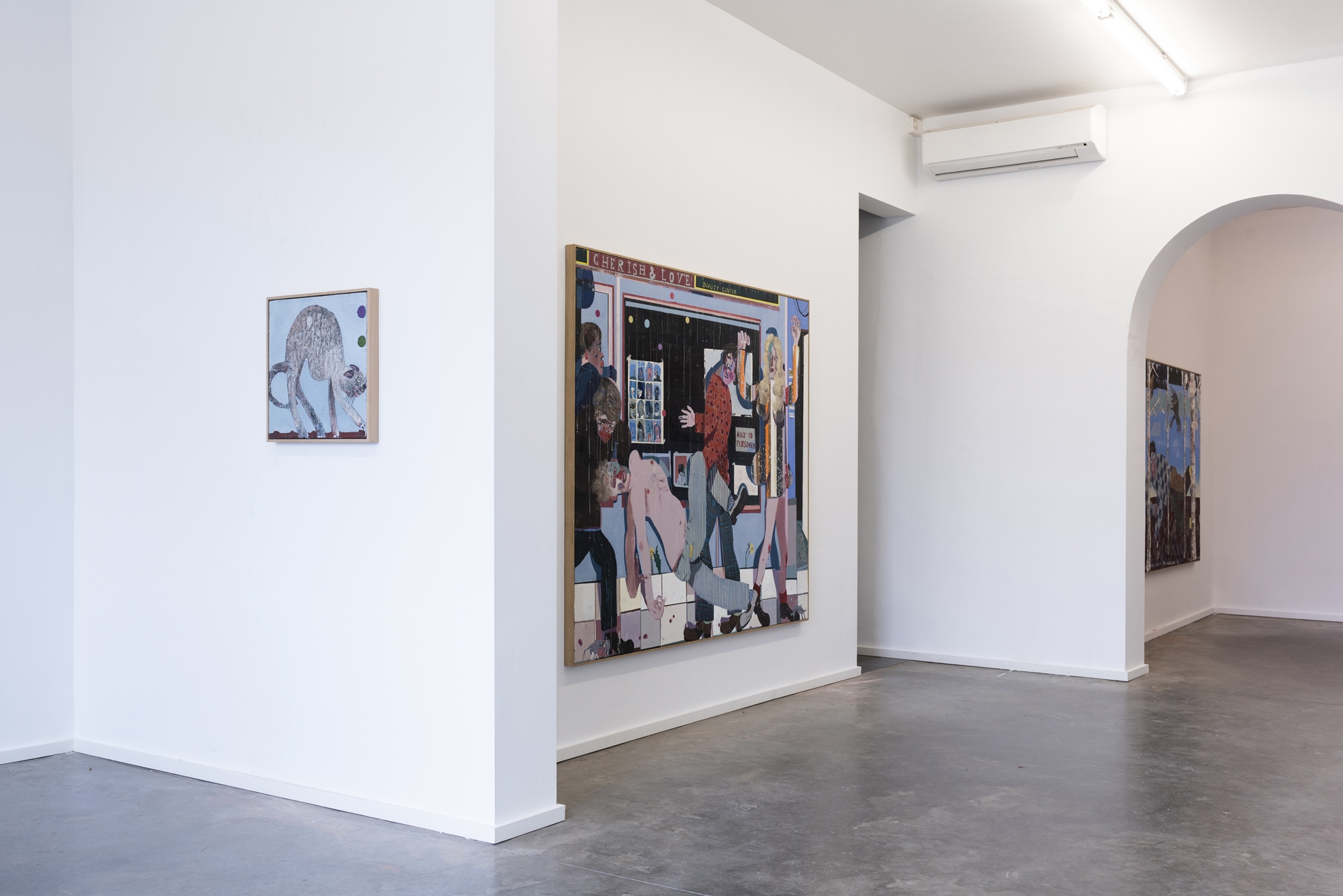 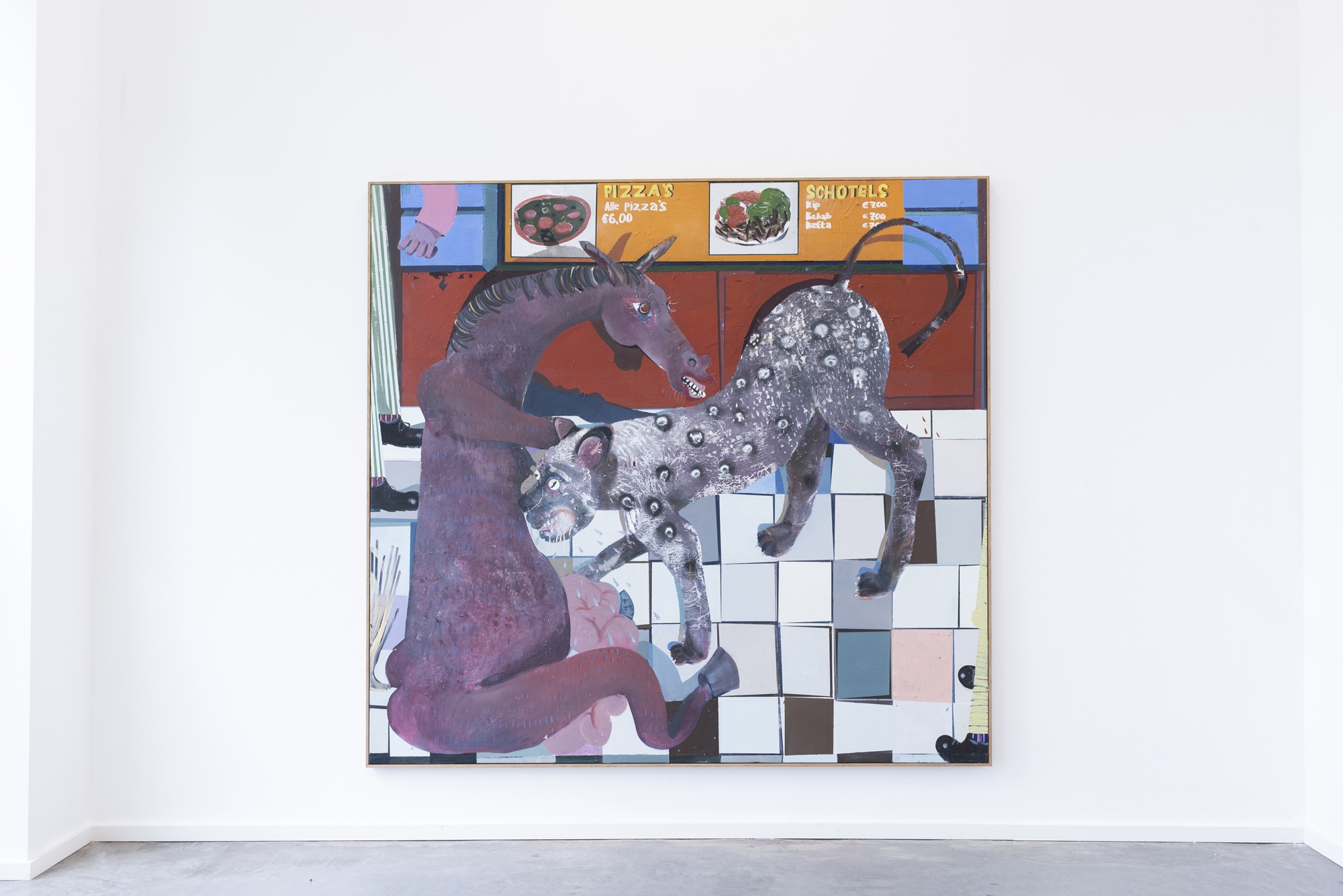 Solo exhibition by Pieter Jennes, born in 1990 in Mortsel, Belgium. Lives and works in Antwerp.

It’s often the case for Jennes that a painting turns out differently than it was originally conceived. He doesn’t do sketches, preferring to find out what works directly on the canvas. ‘If I don’t like it, I just paint over it’, he says. This results in multiple layers, which give his paintings texture, tac-tility. ‘I find that skin of paint really important. You can feel it, with your eyes.’

He also experiments, welcomes coincidence. Such as by scratching at the paint using the fork with which he is eating his lunch, using sand to achieve a certain graininess, pressing paint pots against the canvas to leave an imprint, on which he then builds further. He is not afraid to try things out: in the past he has created texture using bubble wrap and even his own sweater. He throws water and turpentine – the mixture in which he keeps his brushes – over the faces of his characters to create the effect of air bubbles. He discovers such techniques coincidentally and then employs them intentionally.

The texture in his paintings contrasts with their lack of perspective: the paintings are two-dimensional, a very conscious choice. ‘I used to look at a lot of Islamic miniatures’, says Jennes. ‘I like letting go of perspective. It affords a lot of freedom. I like the Armenian filmmaker Sergei Parajanov for the same reason: he films everything from the front. He directs films as if they were theatre.’

Theatre, the viewer and the viewed also play a role in Jennes’ paintings. In Tomorrow is so far away, the heads of the spectators float in the middle of the background: the perverse entertainment industry visualised. More often, however, there is a row of heads along the bottom of the painting, like the audience of a theatre play. The painting becomes a stage. In this way, Jennes creates a meta-layer by duplicating the audience: we, the viewer, are watching people who are watching other people. The gaze and the act of viewing itself become a subject of the painting.

Inspired by painting, cinema and his own neighbourhood, Pieter Jennes is thus the creator of a highly unique oeuvre. His very recognisable personal style draws on the work of Flemish painters from the 1920s, such as Jean Brusselmans and Gustave De Smet, but also Ensor, Otto Dix or Georg Grosz, African masks and folklore, the cinema of David Lynch and Werner Herzog. While his work is clearly rooted in the history of painting, it is equally clear that it is made in the present – note the disposable Starbucks coffee cup, the sign on a shop door that reads mondmasker verplicht (‘face mask obligatory’), the pair of Adidas socks, the ad for Ola-brand ice creams.

The tiger somewhat resembling a leopard, the horse being somewhat deformed and the general lack of perspective make the painting rather reminiscent of De circustent (‘The circus tent’) by the painter and graphic artist Edgard Tytgat (1879-1957), whose work Jennes admires. In De circus-tent, Tytgat – whose early work was characterised as impressionist but who would later be described as an expressionist or na ve painter – depicts a zebra that is scarcely recognisable as such. ‘Tytgat paints kind of clumsily’, says Jennes. ‘I think he’s brilliant’.

The world of Tytgat is, like that of Jennes, bittersweet. His works are bathed in an atmosphere of childhood fantasy, eroticism and lost innocence. And, like Jennes, he drew inspiration from his everyday life and events from his own surroundings. In Jennes’ case, this often results in scenes set against the backdrop of shops from his neighbourhood in Antwerp. And his drawings often feature items from his own book and record collection.